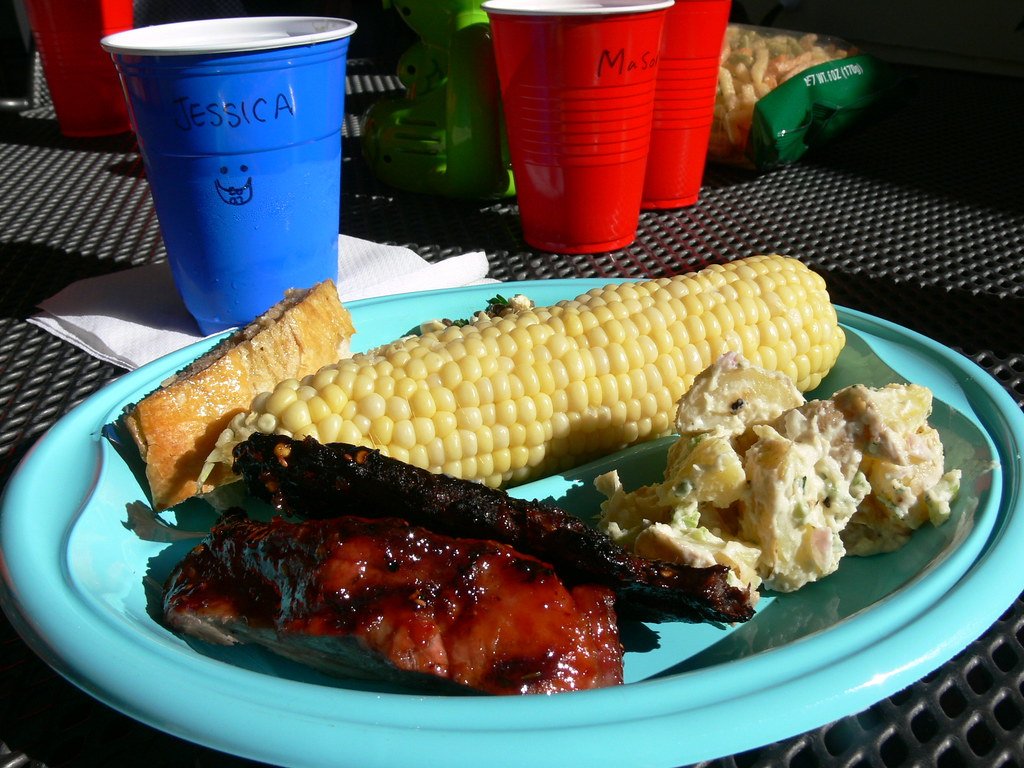 The WC has just the wines to pair with this plate of barbecue.

Labor Day marks the traditional end of summer, even a pandemic summer. Hence these wines, which should cheer up even a socially-distanced holiday barbecue. Churro, the blog’s associate editor, and the Wine Curmudgeon will be doing that, if Dallas’ 100-degree temperatures allow for it.

These four bottles will get you started for Labor Day wine 2020; don’t overlook the blog’s porch wine guidelines:

• McManis Cabernet Sauvignon 2018 ($12, purchased, 13.5%): This Lodi cabernet is balanced, and neither too ripe or too hot. Its New World fruit (black currants, even) and tannins actually hold everything together. This a big red wine that needs food, and especially red meat from the grill. Highly recommended.

• Anne Amie Cuvée A Amrita 2018  ($18, purchased, 12.8%): This goofy Oregon white blend with a bit of fizz is always enjoyable, and it’s even available closer to $15 if you look hard enough. The fizz is spot on, better than some Proseccos, and the sweetness is buried in the back behind some lemon and red apple fruit. Highly recommended, and just the thing for porch sipping.

• Fantini Trebbiano d’Abruzzo 2018 ($9, purchased, 12%):  This Italian white, a long time WC favorite, is as it always is — tart and lemony. Chill it, drink it, and don’t worry about what other people think about what you drink. Imported by Empson USA


Photo: “Linner!” by jessicafm is licensed under CC BY-ND 2.0

The McManis petit sirah: $10 California red wine that is well made and speaks to quality and value

California’s McManis family, despite the trials and tribulations of the post-modern wine business and the faint-heartedness of others, still cares more about quality than focus groups. The McManis petit sirah is just one of the family’s many wines that proves that point.

The McManis petit sirah ($10, purchased, 13.5%) is a reminder of the early days of the blog, when petit sirah was used to make quality cheap wine – a little plummy, a bit rich, not especially tannic, and just enough acidity for balance. Today, it’s mostly used to make sweet, “smooth,” flaccid red blends that cost $15 or $16, because someone somewhere thinks that’s what younger consumers want.

The McManis is the exact opposite of that, one of the best petit sirahs I’ve had in years, regardless of price. There is sweet dark plum fruit, but this is not a sweet wine. Plus, subtle acidity and the correct tannins. In this, it’s a reminder that California used to give us some of the world’s best cheap wine. Drink this with everything from takeout pizza to fancy meatloaf, and it wouldn’t be so bad on its own after a hard day at work, either. And you could do a whole lot worse using the McManis as a gift for the holiday that must not be named later this week.

Highly recommended, and a candidate to for the 2021’s  $10 Hall of Fame and Cheap Wine of the Year.

California viognier is infamous for being heavy, overoaked, and too alcoholic, lacking grace and subtlety. So how does the McManis viognier taste completely different – and for just $10?

Because the McManis family still cares about making great cheap wine. Others may have gone over to the dark side, but the McManis viognier ($10, purchased, 13.5%) remains a symbol of what California once was – quality wine at a fair price.

The 2016 viognier remains fresh and interesting, with ripe, juicy apricot fruit, an almost oily mouth feel, and a stone fruit pit finish. In this, it’s classic New World viognier, a little less overwhelming than its French cousins from the Rhone, but still heavy enough that it’s a food wine.

I drank it with a cornbread tamale pie made with chicken and tomatillo sauce, and I couldn’t have asked for a better pairing. It would also work with roast chicken (and add some dried apricots) or any post-modern salad with fresh stone fruit.

Highly recommended, and the year’s first candidate for the 2020 Cheap Wine of the Year. The 2017 is the current vintage, but there is plenty of 2016 on store shelves.

The McManis merlot is a revelation: California red wine that doesn’t taste like grape juice on steroids

My pal Dave Falchek, a fine wine writer, has insisted for the past couple of years that the McManis wines are better than my beloved Bogle, perhaps the last great California cheap wine brand. This year, the blog’s readers agreed with Dave, and McManis won the cheap wine poll. The McManis merlot shows why.

The McManis merlot ($10, purchased, 13.5%) was a revelation. And I say this not just because I don’t enjoy merlot, but because it’s almost impossible to find California merlot at any price that tastes like it’s supposed to. Too many are jacked up with so much sweet fruit and fake oak (yes, even the pricier ones) that they make me sigh and reach for a glass of Spanish tempranillo.

The McManis, though, tastes like merlot – blueberry fruit, just the right heft for merlot (not as much as cabernet sauvingon, more than pinot noir), and a little of the silkiness that I expect to find in New World merlot. Plus, the finish isn’t bitter or too short, and even shows a little earth.

Highly recommended, and headed for the $10 Hall of Fame this week to join the McManis petite sirah. Perhaps more important: It goes into my red wine rotation, the wines I buy regularly. It’s perfect for a Tuesday night takeout dinner, and can even hold its own if I feel like cooking.

Welcome to the club, McManis. 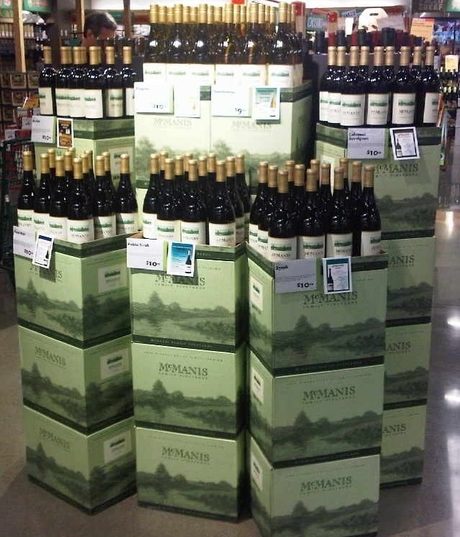 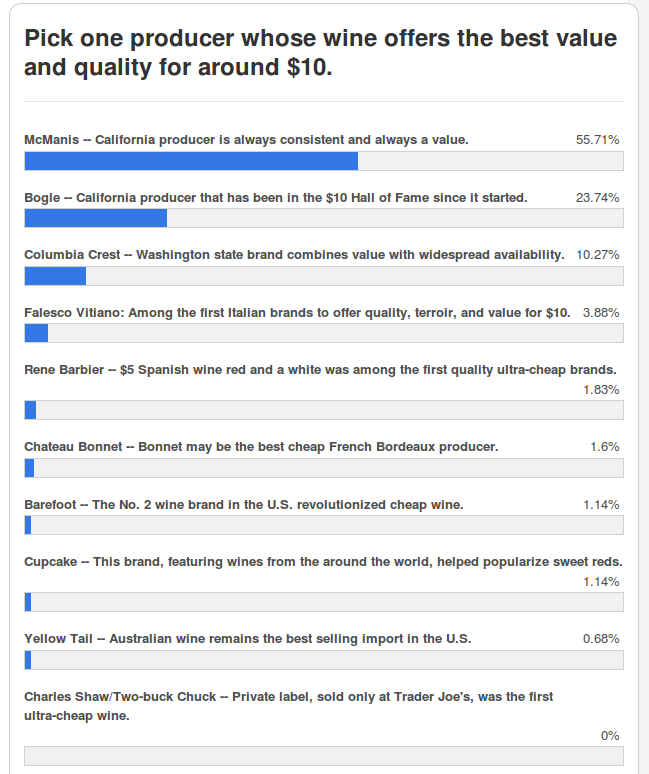 ? Georges Dub uf Beaujolais Nouveau 2013 ($8, purchased, 12%): Much better this vintage — less banana and more oomph, including acidity that hasn’t been there for several years. It’s still not as grapey as it should be, but decent enough cheap wine. Good to see that this annual tradition is worth buying again.

? Cousi o-Macul Cabernet Sauvignon Antiguas Reservas 2010 ($17, sample, 14%). Chilean red has more in common with California Central Coast style, meaning lots of juicy black fruit and a little herbal aroma, than it does with many Chilean wines.

? McManis Viognier 2012 ($12, purchased, 13.5%): Oily, very fruity (peaches?), and a little bitter on the back — decent enough, but not near the quality of the rest of McManis’ wines. California and viognier continue to be a difficult combination.

? 14 Hands Hot to Trot White 2010 ($10, purchased, 13%): Nowhere near the quality of the 14 Hands red blend, this Washington state effort has an unpleasant finish and is uneven and disjointed, with an odd fruitiness. Very disappointing.

Wine competitions, regardless of some deserved criticism over the past couple of years, are the great levellers of the wine business. Since every wine is judged blind, price, appellation, and critical acclaim don’t matter, and it’s difficult for judges to vote their prejudices. Yes, lots of expensive wines do well, but so do lots of cheap wines — often to the chagrin of the people who give them the medals.

Few things make the Wine Curmudgeon happier than to find quality cheap wine that earns big awardsl at wine competitions, and especially at the best known. That was the case this year, when the McManis ($11, sample, 13.5%) won a double gold medal at the San Francisco International Wine Competition, perhaps the most prestigious of them all. The McManis was in fine company — double golds also went to a $40 California pinot noir, a $125 Napa cabernet sauvignon, and a $50 Paso Robles red blend.

And why not? McManis, as my old pal Dave Falchek regularly reminds me, is at least the equal of Bogle, one of my cheap wine favorites and a fixture in the $10 Hall of Fame. The petite sirah shows why: a little earthiness and lots of dark fruit, not too overdone, and, most importantly, varietally correct, This is petite sirah that tastes like petite sirah, something that too many producers no longer bother with. Drink this with dinner as the weather gets cooler and don’t be afraid to open a bottle or two at Thanksgiving. A candidate for the 2014 Hall of Fame, since it retails for $10 in much of the country.