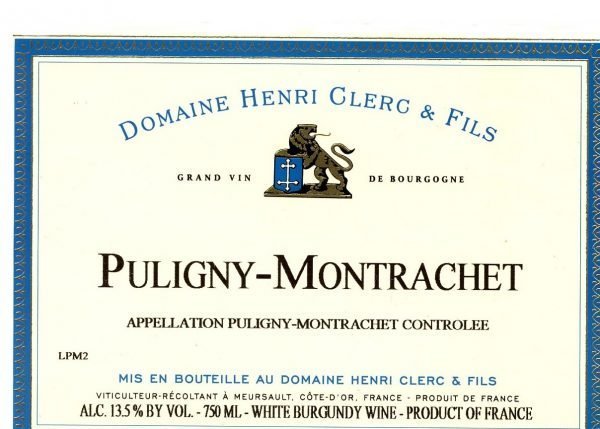 Wine is known for making food taste better, but it can also improve the ambiance of a meal. This has little do with the alcohol; rather, it’s about the quality of the wine and how its enjoyment makes everything else seem better. Which is exactly what the Henri Clerc Puligny-Montrachet did recently.

The Big Guy wanted to have wine with lunch, which meant we had to eat at the blog’s unofficial BYOB restaurant. The catch, as we discussed on the drive there, was that the food had been ordinary lately and the service worse. It’s not asking too much to be greeted politely at a restaurant, is it? And especially when you eat there as often as we do?

Not to worry, The Big Guy told me. I have some Puligny, and all will be well. And he was exactly correct – the Henri Clerc Puligny-Montrachet ($50, purchased, 13.5%) smoothed out all the rough edges, and I remember the wine much more than I remember the rest of the lunch.

The Clerc is the kind of wine that reminds us why French wine is French wine, if only because the estate dates to the 16th century. The wine itself — chardonnay from the Puligny-Montrachet region of Burgundy is young. The term is “nerovisite” – sort of like a teenager who can’t sit still. As such, it should open and become more elegant and richer as it ages over the next decade. Now, though, it’s delightful – lots of fruity acidity (crisp pear, pleasantly tart pineapple?); full through the middle; and lots and lots of the wonderful Puligny minerality on the finish.

Highly recommended, and just the gift for Father’s Day if Dad wants something other than a big, red, and fruit bomb-y wine.