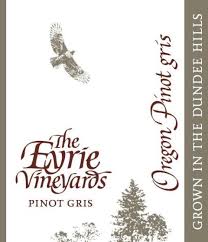 The Eyrie pinot gris shows why this family producer is one of the best wineries in the U.S.

No, the Eyrie pinot gris is not the most expensive wine in the world, and most of the Winestream Media would probably consider it popularly priced. But for those of us who consider value more important than anything else, a wine that costs this much and delivers value is rare and worth noting — and a wine to buy over and over.

The Eyrie pinot gris ($23, purchased, 12.5%) comes from one of my favorite producers, the second-generation Oregon winery that did so much to bring pinot noir to that state (and the U.S.). The pinot gris, if less well-known, is equally worth drinking.

This is still a very young wine, and the pear fruit (and maybe some peach) really isn’t showing the way it should in a few years. It’s sort of hiding in the background, so that when you taste it, you’re not quite sure if it’s there, but you know something is. And, of course, that’s far from the only quality — lots of flint and minerality, maybe some spice, and a clean mouth feel.

Highly recommended. Pair this with grilled seafood or roasted chicken, and be glad such value still exists in a wine costing more than $20.

The Eyrie Vineyards pinot gris is substantial, age-worthy, and delicious – who cares what score it got?

How useless are scores? The Eyrie Vineyards pinot gris got 88 points on Cellar Tracker (the blog’s unofficial wine inventory software). Just 88 points for one of the best-made wines I’ve tasted in my life? So yes, past useless.

The Eyrie Vineyards pinot gris ($22, purchased, 12.5%) is a dazzling Oregon white that doesn’t rely on showy limeade fruit to make its point. Rather, it’s about spice and white pepper, a full and complex mouth feel, and layers and layers of subtlety. In this, what fruit there is (lime peel?) is just one of its many attributes.

But why not? The Lett family behind Eyrie has been making Oregon wine for as long as there has been Oregon wine, and every Eyrie wine I’ve ever tasted reflects their history and passion. This is a substantial wine, as “important” as any chardonnay is in the foolish hierarchy that is part of how wines are scored. Or, as a nationally known expert once told a judging panel I was on: “If it isn’t cabernet, chardonnay, or pinot noir, it doesn’t get a gold medal.”

Highly recommended – not only one of the pinot gris I’ve ever tasted, but a steal at this price. This is a substantial wine that will age for maybe a decade, but is delicious now. Pair this with roasted or grilled seafood and chicken dishes (no heavy sauces), and marvel at what second-generation owner Jason Lett has accomplished.

Once, wine was about history and tradition, and not descriptors. The story of the wine was what mattered, and not whether it was redolent of graphite and cigar box aromas. It’s the latter that makes the Eyrie Vineyards Original Vines Pinot Noir so special.

The Eyrie Original Vines pinot noir ($80, sample, 13%) is made with grapes from the vines that the late David Lett planted more than 40 years ago when he came to Oregon to grow pinot noir. Lett, who pioneered the grape in Oregon, was considered crazy for doing so – why would anyone leave California for the wilderness of the Pacific Northwest to make wine with a grape that only the French did well?

This wine answers that question. It speaks to Lett’s vision and passion – an elegant and graceful effort that reminds us that wine can be about terroir and the people who make it, and not focus groups, sales charts, and price points. It also shows that winemaker Jason Lett has taken his father’s vision and updated it to the 21st century

Look for elegance and grace, a wine that can hold its own with any of the world’s best. It has Oregon’s telltale brambly cherry fruit, but so much more – layers and layers of complexity, black pepper interspersed with the fruit, tannins that hang around just long enough but not too long, a memory of oak that is just enough to do the job, and who knows what else going on. It will age well for the next several years at least, and maybe even longer.

Highly recommended, the kind of wine to buy for someone who loves wine and will appreciate the effort and history that went into it.