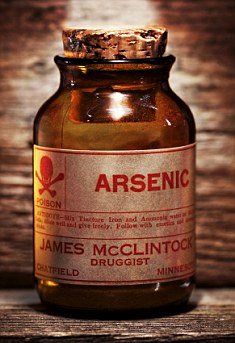 David K. TeStelle may be a terrific trial attorney, a tremendous human being, and a snappy dresser. But he apparently knows little about logic and even less about wine.

“The lower the price of wine, the more arsenic you are getting,” said TeStelle, one of the lawyers suing Big Wine for knowingly selling arsenic-laced wine in the class action lawsuit that has the wine business all atwitter (pun fully intended).


The Wine Curmudgeon will assume that TeStelle was misquoted or taken out of context, since to assume that all cheap wine is stuffed full of arsenic and that all expensive wine is pure and virginal is silly. Logical fallacies, anyone? Did we stop driving cheap cars because the Yugo was a piece of junk? My Honda Fit certainly isn’t. Are Mercedes and BMW models never recalled?


The testing behind the lawsuit apparently didn’t check the arsenic level in any expensive wine, which takes the rest of the logic out of TeStelle’s argument. Maybe BeverageGrades, the lab that did the testing, didn’t want to to spend the extra money, and it was easier to buy Two-buck Chuck since there are three Trader Joe’s in Denver. Or that the Big Wine companies that make most of the cheap wine in the lawsuit have deeper pockets than a $40 brand that makes 25,000 cases. One can’t get damages out of a company that doesn’t have money to pay for damages.


Besides, and I can’t emphasize this enough, none of my wines — the three dozen or so in the 2015 $10 Hall of Fame — are on the arsenic list. This speaks volumes about the difference in quality in wine, cheap or otherwise, and something that I have repeated and repeated and repeated throughout my wine writing career. It’s not the price that matters — it’s the honesty of the wine. Does the producer care about quality and value, or is it just making wine to make wine? Which is just as true for $100 wine as it is for $10 wine.


That’s something that everyone who is being snarky about the quality of cheap wine in the wake of the lawsuit (including people I like and whose opinions I respect) should remember. Quality, as well as safety, isn’t something that can be measured by price. It’s something that depends on integrity, and no amount of money can guarantee that.