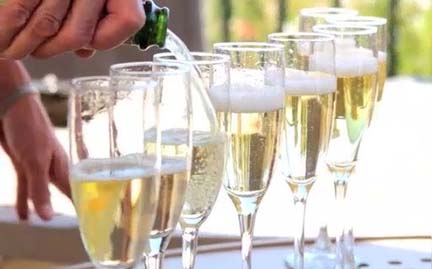 Anyone can spend $50 for a bottle of sparkling wine, and too many people do. Hence, value and quality for a more than reasonable price for New Year’s sparkling wine 2019.

• La Granja 360 Cava Brut NV ($7, purchased, 11.5%): This Trader Joe’s Spanish bubbly, pleasant and sweetish, tastes more like Italian Prosecco than cava. But if you don’t mind the style (common for Trader Joe’s sparkling wines), than you’ll appreciate the soft fruit (less tart green apple and more red delicious) and a much softer mouth feel. But the bubbles are tight, and you can do a lot worse at this price. Imported by Evaki

The first time the Wine Curmudgeon tasted this French sparkling wine, it was apparently corked – flawed thanks to the chemical TCA, which muted the flavors and gave it the faint aroma of wet newspaper. Hardly pleasant at all.

But, since I am a professional, I tried another bottle a year or so later, and that’s why the De Chanceny Cremant Brut Rose ($15, purchased, 12.5%) is the wine of the week with Mother’s Day on Sunday.

The De Chanceny is made with caberent franc, a red grape, in the Loire region of France, using the same technique as much more expensive Champagne. It’s usually a value, about one-third the price of comparable Champagne, and that’s true here. Look for berry aromas, lots of ripe black cherry fruit mixed with some pleasant tartness, terrific, tight bubbles, and a crisp, clean finish. It’s not as luxurious or yeasty as Champagne, but it’s not supposed to be.

In this, it’s food wine – Mother’s Day brunch certainly, but also a bottle for mom to enjoy when all the celebrating is over and she’s on her own again.

The Jean Claude Mas Blanquette de Limoux isn’t Champagne, but it’s not supposed to be — so enjoy the difference

The world does not revolve around Champagne, as I make mention of each year around this time. Sparkling wine is made almost everywhere that wine is made, and there are a variety of interesting, fairly priced, and quality labels. So know that the Jean Claude Mas Blanquette de Limoux NV does not taste like Veuve Clicquot or Nicolas Feuillatte, but also know that it’s not supposed to.

The Jean Claude Mas Blanquette de Limoux ($15, purchased, 12%) is a cremant, which is what sparkling wine from France not made in the Champagne region is called. A cremant from Limoux is made the much the same way as Champagne (the second fermentation is in the bottle and not a steel tank, as with Italy’s Prosecco), but there are a couple of differences. Hence, the production is called methode ancestrale to differentiate it from Champagne’s methode champenoise.

First, cremant de Limoux is made with different grapes, primarly mauzac, which is local to the region. Next, the second fermentation is unaided, so that the bubble creation doesn’t get a boost from the addition of more yeast, as in Champagne. These differences make for subtle, yet interesting changes from the sparkling wine most of us drink.

The Jean Claude Mas Blanquette de Limoux, thanks to the mauzac, is a very traditional blanquette, with a yeasty, brioche kind of finish. But unlike so many Champagnes that finish in that style, it’s also quite fresh and light, with barely ripe apple fruit. In this, it’s almost a food wine – New Year’s brunches, for example. What you don’t want to do is use it for something like mimosas, which would cover up what makes the wine interesting.