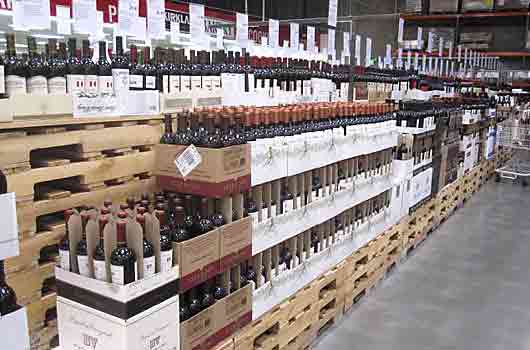 Costco, perhaps the most influential wine retailer in the world, wants to sell regional wine

How does Costco – perhaps the most influential wine retailer in the world – decide what to carry? It wants to drink local.

Annette Alvarez-Peters, who oversees the chain’s wine buying, said half of the its wine labels change regularly and that its 12 regional buyers look for local wine to help fill in those blanks. Or, as she told a California trade seminar: “It really has to be, ‘Why is your item so compelling, and why does your item fit in our section?’ ”

This is one of the few times that Costco and Alvarez-Peters have defined publicly what the chain is looking for; Costco has traditionally been reluctant to discuss its wine buying practices. This matters because it sells so much wine, almost $2 billion worth in 2015, equal to about four percent of the U.S. total – and in just 412 stores.

And that Costco wants to drink local is another reason to declare victory in the battle for regional wine recognition. The retailer can carry any wine it wants, and even the biggest producers make tremendous price concessions to get on its shelves. Which means that Costco is saving space for bottles not from Big Wine, but from small, local producers.

I learned about this recently when the Costco buyer for Texas approached one of the state’s wineries. The winery, its sales person told me, was flabbergasted. Why would Costco want to sell its wine? If nothing else, it didn’t make enough to fill one of Costco’s huge displays. But quantity doesn’t matter as much as quality, part of what the chain’s founder/guru Jim Sinegal told me years ago when I was lucky enough to interview him for an airline in-flight magazine. The retailer wants shopping to be like a treasure hunt, where its customers run across something they didn’t expect to find. In this case, quality local wine.

So pay attention, all those retailers and restaurants that don’t want to drink local. If Costco can do it, why can’t you?

Know three things about this interview with Annette Alvarez-Peters, who runs the Costco wine program:

First, any interview with Peters is worth reading, no matter how technical (and this one is technical), because she doesn’t do many and she is one of the two or three most important wine people in the world. So when Alvarez-Peters says Costco isn’t going to sell wine over the Internet in the U.S., then it’s not likely any other big retailer will, and retail direct shipping will continue to languish in the netherworld it currently inhabits.

Second, it shows Costco’s domination of U.S. wine retailing. It’s not so much that it’s the biggest wine retailer in the country or that it sold $1.69 billion of wine last year, but that it may account for as much as four percent of all the wine sold in the U.S. by dollar volume. In addition, the chain may do as much as $3 million in wine for each store, a gigantic number given that wine isn’t Costco’s reason for being. Kroger, whose wine sales could be close to Costco (parsing these numbers isn’t easy, since not all retailers break out wine revenue), has six times as many stores in the U.S. All of which means Costco has leverage with producers and distributors, even the biggest, that no one else has.

Third, a wine trend at Costco is a wine trend that producers pay attention to because the chain sells so much wine — and that means it’s a trend in the rest of the country that everyone else will be copying. So we are going to see Big Wine brands heavily discounted, lots more sweet red, premiumization, and rose. And Costco is dabbling with wine delivery; it it figures out how to make delivery profitable but affordable for consumers, delivery will become a trend.

We can argue whether any of this is good or bad, but that almost doesn’t matter. What matters is that what happens at Costco changes the way everyone buys wine, even those of us who don’t shop there. Unfortunately, the interview doesn’t do a good job getting that across.


More about Costco wine:
• Costco and its role in the wine business

? Costco’s Peters speaks: Annette Alvarez-Peters, who buys alcohol for the Costco warehouse chain, is one of the most important people in the wine business; as such, she rarely gives interviews. Hence my surprise at an interview with the Shanken News Daily trade news service, even thought it’s short and Alvarez-Peters doesn’t say all that much. What’s worth noting is how much of its private label wine Costco sells; its Kirkland pinot grigio and cabernet sauvignon are two of the chain’s biggest sellers, both at less than $10 a bottle. That consumers will drive to Costco just to buy its wines is mind-boggling in the day of the Great Wall of Wine. Most retailers would kill for that kind of loyalty, which they’d have to do because they don’t know how to get it any other way. The other reason to mention this? Because a Costco piece that ran on the blog in 2012 is the second most popular post , based on one-day visitors, in blog history. Shoppers don’t just want to go Costco — they want to read about it.

? Who drinks wine? The Wine Market Council has updated some of its numbers, and the results are intriguing. If you’re a high-frequency wine drinker (you drink wine at least once a week), you’re more likely to be married than if you drink wine less than once a week, the occasional wine drinker. High frequency wine drinkers are older, 51-44, than occasionals, but it’s not like either of them is young. The latter makes perfect sense given the wine business’ inability to understand it should try to sell wine to people other than old white guys. Note to advertisers: the blog’s demographics skew younger than that, no doubt because I write about wine that younger people can afford.

? Examine that spending: The British spend about 1 billion (about US$1.6 billion) more on illegal drugs and sex each year than they do on wine and beer, according to a just-released UK government study. That works out to about 260 (US$422) per adult. I don’t know whether that’s a lot of money for dope and whores, but I think the numbers are a little dicey. The average adult in the U.S. spends about $150 a year on wine (based on 242 million adults and $36.3 billion in wine sales, per the Wine Institute) and $413 on beer (based on $100 billion in beer sales, per the Brewers Association). That a country with a pub culture spends less per capita than we do on beer and wine is hard to believe, which makes me think the drugs and sex number should be higher. By comparison, I spend nothing on the latter and some US$2,500 (about 1,500) annually on wine, which doesn’t include other booze or restaurant wine purchases. I’ll let you draw your own conclusions about that.