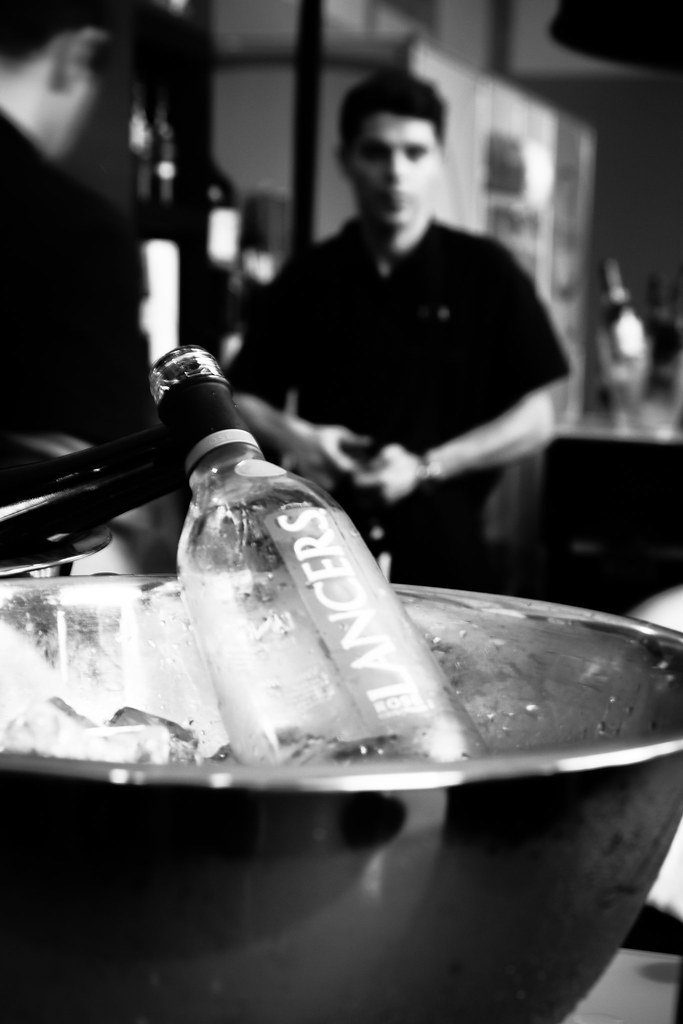 • Jean-Jacques Vincent Bourgogne Blanc 2017 ($20, purchased, 13%): This is the second time I bought this chardonnay from the Burgundy region of France, which shows that even those of us who do this for a living make mistakes. Bland, boring, and overpriced. Imported by Frederick Wildman & Sons

• Raimat Saira Albarino 2016 ($10, purchased, 12.5%): This Spanish white is cheaply made, watery, and doesn’t much taste like albarino. It apparently exists for no other reason than to cost $10. Imported by Aveniu Brands

Photo: “Lancers” by Rochelle Ramos is licensed under CC BY-NC-SA 2.0

? A new format: Whole Foods, the word’s most powerful natural grocery store chain, said last week it would launch a second, less expensive version aimed at 20-somethings who can’t afford to shop at the grocer. This is mind boggling, if only because no one has ever attempted it — like Walmart doing an upscale grocer to attract aging urban Baby Boomers who think Walmart is beneath them. It also probably won’t work, or else it would get a separate post, because Whole Foods Jr. could wreak havoc with the wine business. That’s because, assuming wine will be as important to Whole Foods Jr. as it is to the parent, the chain will have to stock cheaper wines without the noxious markups it currently uses, like Chateau Bonnet for $16. That means private label wine on the scale of Trader Joe’s, which Whole Foods Jr. sounds suspiciously like. And if that’s the case, all the gloom and doom about the end of the cheap wine business in California will be over. All that Whole Foods Jr. $5 wine will have to come from somewhere, and that’s what California’s Central Valley exists to do.

? No, no, Big Wine: The Wine Curmudgeon is finally and apparently not the only one who has noticed the role Big Wine plays. A group of northern California activists met last week to call for a halt to Big Wine’s growth in wine country. “They hire a chef before a wine-maker. This has to stop. We cannot let them pave over more of our ag land,” said one of the speakers. In this, the new group may be echoing what has happened in France over the past 20 years, with farmers and vineyard owners protesting Big Wine in its European guise of internationalization.

? Bankruptcy? The company that owns Cameron Hughes, the wine geek’s favorite discounter, has been forced into receivership and a sale or merger is possible, reports Lew Perdue at Wine Industry Insight. The bank holding Hughes’ debt forced the action, which is often part of a bankruptcy. In this case, though, says Perdue, that probably won’t happen, and the receivership appears to be part of tug of war between the company and its bank over unpaid loans. The Hughes parent company issued a statement saying it was trying to reach an agreement with the bank to restructure its debt and would continue in business.

? Stealth wines: Which is what my pal Dave McIntyre calls labels that don ?t have wineries; rather, distributors, stores and importers commission custom blends from negociants. One of the leading practictioners of stealth wines is Cameron Hughes, a broker who buys excess wine from producers and bottles it under his own name. Several visitors have asked why I haven't written about Hughes, since his reason for being is bargain wines. As Dave notes, his wines can often cost pennies on the dollar compared to similar products. I haven't done anything because of the limited availability of Hughes' wines. By the time I wrote something, the wine would likely be sold out. And what's the point of that? Hence, take a look at Dave's piece, which ran in the Washington Post, and which does an excellent job of describing what Hughes does and why it works. And the wine isn't bad, either.

? Take that, state of Texas: Someone is even more annoyed with the state of Texas and the way it has treated its wine marketing and research programs than I am, which means they are pretty annoyed. That is Vintage Texas' Russ Kane, and he spares nothing in a recent post about what happened: "All we have in Texas is a starry-eyed man with foolish aspirations of being president while he casts the fate of his state ?s wine industry to the hot dry Texas wind." There's even video.

? Take that, beer distributors: We haven't had any HR 1161/5034 fun on the blog lately, so how about this? Lew Perdue at Wine Industry Insight has a suggestion for everyone who is fed up with the distributor lobby and its attempt to tighten direct shipping laws. And everyone, of course, means almost everyone who writes wine blog in the U.S. Perdue suggests that we boycott Big Beer, whose distributors are at the forefront of HR 1161, "because Budweiser, Miller, Coors and the other mega-breweries provide the National Beer Wholesalers Association with the money they need to screw consumers. I ?ve been boycotting Big Beer for a couple of years now because I refuse to feed the machine. I will not allow the profit from my beer purchases to finance their arrogance and totalitarian actions." I'm going to have to check — does beer from Aldi count?