Not every French producer wants to make soft and fruity wine that will get 94 points. Many, including the less known Georges Vigouroux, make wine that is varietally correct and tastes of where it’s from in France – its terroir. Such is the Vigouroux Pigmentum Malbec.

This red wine comes from Cahors, a lesser known appellation just east of Bordeaux. Traditionally, its wines have been less sophisticated than Bordeaux, the less established country cousin who could never quite come up to Bordeaux’s standards.

In this, its wines remain heavier and more rustic, without the polish that’s going to get most of them a high score. But that doesn’t mean they’re poorly made or aren’t worth drinking. The Vigouroux Pigmentum Malbec ($10, purchased, 13.5%) shows just that: Berry fruit, heavy but not ponderous, and full in the mouth without being too ripe. And there is even a hint of tannins.

This is a far cry from the sappy Argentine malbecs that fill grocery store shelves. In fact, malbec is a French grape, once even used in Bordeaux. Today, though, it’s mostly relegated to Cahors, where improvements in winemaking technology have improved wine quality from the country cousin days.

Highly recommended, and especially if you prefer – as I do – wine with character and grip. A candidate for the 2019 $10 Hall of Fame.

The Vassal de Mercues, a malbec from Cahors, shows cheap red Bordeaux a thing or two about quality and value

During a recent retail visit in Dallas, the employee who had been mostly ignoring me mentioned that those of us who were old-fashioned enough to prefer French wine to taste like French wine should try red Cahors like the Vassal de Mercures. That suggestion made up for what was otherwise a worthless shopping trip.

That’s because Cahors wines like the Vassal de Mercues ($10, purchased, 13%) are more traditional than today’s red Bordeauxs. They’re made to retain the earthiness and Gallic-icty that many less expensive Bordeauxs have abandoned in their quest to get 92 points. That a wine from Cahors, the original home of malbec, can be more Bordeaux-like than Bordeaux is a another example of why the wine business makes me crazy.

The Vassal de Mercures is a second label from a property owned by the noted Georges Vigouroux, whose cheap wines have appeared many times on the blog. This wine is earthy – almost rustic – and doesn’t overdo the blueberry and black cherry fruit. There is also a little spice, while the tannins, sometimes a problem with cheap wines made in this style, are refined and do what they are supposed to do.

Highly recommended, and a candidate for the 2018 $10 Hall of Fame. This would pair with almost anything from chicken or eggplant parmesan, made with a sturdy red sauce, to simple roasts, whether beef or chicken. 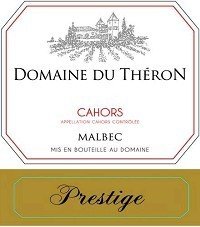 An inexpensive French malbec that is somehow fruity and earthy

One reason so little malbec is reviewed on the blog is that the cheap stuff, full of fakey sweet black fruit, isn’t worth reviewing, and the expensive stuff often isn’t worth the price. So when the PR type swore to me that the French Domaine du Theron was a malbec worth reviewing, I accepted the challenge.

She was right. The Domaine du Therom Prestige ($15, sample, 13%), from the Cahors region in southwestern France, combines malbec’s varietal fruitiness with a certain French style. Call it terroir and be glad: It’s a delicious red wine where there’s just enough funky woodsy character to play off the traditional malbec fruit (blueberry? black cherry?) so that the latter doesn’t overwhelm the former.

It’s also a surprisingly rich wine that will age over the next three to five years, getting a little leaner as it gets older but without losing all the fruit. How often can we say that about a $15 wine? And it’s worth noting that this is a $15 wine that is worth $15, unlike the premiumized junk being foisted off on us by so many others.

This is red meat wine – roast lamb, smoked duck, even a pot roast as the weather cools off. It offers an intriguing contrast to the best made fruit forward Argentine malbecs, showing the differences between New World and Old World styles.