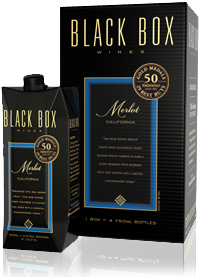 Why spend $25 for California red wine when the Black Box merlot costs just $4?

It’s not so much that the Black Box merlot is the wine of the week; I’ve written about Black Box over the past nine years. What makes it newsworthy these days it that it’s not all that different from wines that cost five and six times as much.

How far has the wine business fallen?

The three-liter Black Box merlot ($16, purchased, 13.5%) is sitting on my kitchen counter next to a bottle of $25 Santa Barbara pinot noir. The wines are so much much alike that it’s terrifying – the same overdone chocolate oak, the same very berry fruit, and the same direct, simple structure. Yet, the pinot costs six times as much (since one Block Box is equal to four bottles). What’s even more terrifying is how they aren’t alike – the Black Box merlot has acidity and tannins, and tastes like California merlot. The pinot noir has almost no varietal character, and is another example of cynical, post-modern winemaking.

Know, too, that the Black Box merlot is as it has always been, competent cheap wine that probably isn’t worth writing about. But the discounting that is so common these days has turned it into a tremendous value. The suggested retail price is $25, which is $6 a bottle, but you can easily find it for as little as $15. At that price, it would be a serious contender for the 2017 $10 Hall of Fame if not for the horrible oak, which tastes like not unlike those band candy chocolate bars.

So buy a box, have a glass when you want, and giggle at all those maroons who spent $25 to get what you got for $4.