• Orange is the new rose: How else do we know that rose has become acceptable? The wine geeks and hipsters are looking for something else to drink because rose is too bourgeois: “Rosé addicts probably won’t be abandoning the pink stuff, but funky, fruity and unique orange wines add yet another colorful hue to summertime happy hours. Orange you glad you have something new to drink?” Sigh. And, as if you couldn’t guess, the cheapest wine listed in the story is $15, and one costs $90.

• Bring on the Bud: There is much hand-wringing in the wine business over the popularity of craft beer, and it’s easy to see why. Craft beer producers are clever in a way wine types can’t even begin to imagine or would do if they could imagine it. Consider this offer from a Buffalo, N.Y., craft brewer – bring it an unopened Budweiser, and get a discount on its beer, complete with this quote: “We don’t care where the Anheuser Busch product came from or how you acquired it. You don’t even have to pretend someone left it in your fridge after a party. We just want it off our streets.”

• Faking great wine: In one respect, this is nothing new, as any Northern Exposure fan will tell you. But this approach – making wine in the laboratory without grapes – does seem to be taking wine where it has never gone before. Or should be taken. And because this is a tech company that’s making a wine-like product, nothing is cheap. How does $50 a bottle sound? Thought I do wonder what the artificial intelligence wine review will say. 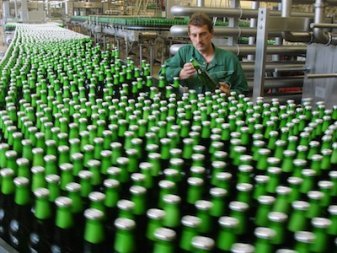 How desperate is Big Beer to regain its stranglehold on U.S. beer drinkers? So desperate that it’s not enough to mock craft beer; now, even chardonnay is seen as a threat, and that has never been the case in the history of the United States. Beer consumption has outpaced wine since before we were a country.

Nevertheless, Miller Lite came up with this commercial, which says that women should take its product to a chardonnay event. My guess is that wine is seen as a Millennial drink, and someone found a study that said Millennials are forgoing Big Beer for wine. Perhaps one of our visitors with ad agency experience can explain why chardonnay is a target, given that old white guys drink Miller Lite.

For all of my ranting about Big Wine, it has never done anything this stupid. The commercial is below — what were they thinking?

How desperate is Big Beer to regain its dominance? So desperate that it’s not enough to mock craft beer; now, even chardonnay is seen as a threat, and that has never been the case in the history of the United States. Beer consumption since before we were a country.

Nevertheless, Miller Lite came up with this commercial, which says that women should take its product to a chardonnay event. Perhaps one of our visitors with ad agency experience can explain why chardonnay is a target, given that old white guys drink Miller Lite.

For all of my ranting about Big Wine, it has never done anything this stupid. The commercial is below — what were they thinking? 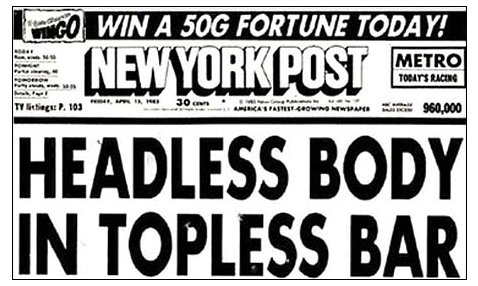 Some people do know how to write headlines.

Because a cranky ex-newspaperman still gets a kick out of silly headlines.

? I’m a teetotaler: The latest Centers for Disease Control edict about drinking, that women who want to get pregnant and aren’t on birth control should not drink, surprised even me, and I didn’t think the Neo-Prohibitionists could surprise me any more. Check out this headline: “Millions of women risk exposing unborn children to alcohol.” That would stop me from drinking, and I can’t get pregnant. The problem, though, is that you’re telling someone not to do something because it might affect something that might happen to them years in the future. Which is neither practical nor good medicine. But it is very scary, which was probably the point.

? Drink the damn wine: Each year, people much smarter than the Wine Curmudgeon tell us that we’re not smart enough because we didn’t buy the correct wines. And it doesn’t even mean we’re drinking the wrong ones, despite this effort: “10 wines you should have bought a year ago.” We didn’t buy the right ones to invest in, and I kept slapping my head as I read it. How could I not buy the 2006 Opus One, which appreciated in value 35.9 percent to almost $4,200 a bottle? No wonder I’m still working for a living.

? They just don’t like each other: In “Bull Durham,” Kevin Costner’s character teaches Tim Robbins’ character how to talk in cliches. I still laugh when I see it, because it’s spot on. As is this headline, if you’re looking for cliches: “The battle between Big Beer and craft brewers is getting ugly.” No kidding? You mean they really don’t like each other? (Another phrase that used to make us groan on the copy desk when we had had to edit it out.) I think, as the story details, that the relationship between Big Beer and craft beer is past ugly when they start cursing at each other on Twitter.

? This is how hip rose has become: California winemaker Dave Phinney’s Locations wines are huge critical and popular hits — wines made in different parts of the world (even Texas) with top-notch winemakers under Phinney’s supervision. They’re known for the big country initial on the label — F from France, I for Italy, and so forth, and as huge, alcoholic fruit bombs — not something I especially enjoy. So what’s the newest Locations wine? A 15 percent French Locations rose, because if the hipsters want brose, Phinney is going to give it to them. The wine lists for $17; given the price and the high alcohol, I couldn’t bring myself to buy it for a review. Even the Wine Curmudgeon has his limits. But if someone wants to write a review, I’ll be happy to run it on the blog, even if you like the wine.

? The big get bigger — or something: Diageo, one of the biggest drinks companies in the world, has decided that wine isn’t big enough for them, and will probably sell the the handful of wine companies that it owns. That these are huge brands, like Sterling and Rosenblum, makes the decision even more intriguing, since Diageo is a top 10 wine company in the U.S. But Diageo, based in Britain, wants to boost its stock price and, as the financial types like to say, “reassure investors” that it wants to make more money. This has always baffled me; what company doesn’t want to make more money? If this happens, look for Sterling and its Diageo brethren to go to some sort of leveraged buyout company, which will cut costs and take the brands private.

? Big Beer? It’s not enough that we’re probably going to have just one beer company accounting for one-third of the beer in the world, but now it looks like craft beer — much of which isn’t all that crafty anymore — could be bigger than the California wine business by the end of 2016. That’s according to figures compiled by Lew Perdue at Wine Industry Insight, who found that craft beer is growing three times as quickly as the California wine business. Given that growth, it would total more than $29 billion, about $1 billion more than California wine. So much for premiumization.