The Cantina di Casteggio Barbera offers much more than $9 worth of value in a tart, leathery style

Barbera grapes produce some of Italy’s best known and best expensive wines. So what’s a barbera doing as a wine of the week?

Because the Wine Curmudgeon can find value even in a grape that produces $80, $90, and $100 wines. The Cantina di Casteggio Barbera is the kind of wine that reminds us that one of Italian wine’s reasons for being is to produce affordable wine to drink with dinner.

The Cantina di Casteggio Barbera ($9, purchased, 13%) is wine for a cold winter night, a fire place, and a house full of rich tomato sauce aromas accentuated with a hint of garlic and the beef braising in the tomatoes. In this, it’s leathery, fruity (black cherry?), agreeably tart, and very Italian – and much more than $9 worth of wine for anyone who appreciates this style.

In fact, it needs food, and would be be a bit off putting without it, being so tart and leathery. But not to worry – it will also work in the summer with barbecue.

Pricing note: All prices are suggested retail or actual purchase price before the October 2019 tariff unless noted

The Marchesi di Barolo Maràia may not be as well known as its nebbiolo-based cousins, but it offers much in value and quality

One of the advantages of the quality independent retailer? That you can pick almost anything off the shelf, even if you don’t know much about the wine, and figure you have more than a decent chance of buying something you’ll enjoy. Which is exactly how I bought the Marchesi di Barolo Maràia.

Italian wine is probably the most difficult to understand in the world, what with an almost infinite number of grapes (many of which have different names in different parts of the country), a dizzying array of regions, and a mostly incomprehensible appellation system. So, when there is no one to ask (and on this day there wasn’t), even those of us who make our living from wine have to take potluck.

Which is how I found the Marchesi di Barolo Maràia ($10, purchased, 13.5%). This red, made with the barbera grape, is from the Monferrato region in Piedmont. That combination means it’s not as pricey or as respected as the nebbiolo wines from Piedmont’s Barolo and Barbaresco regions. (I told you this was complicated, didn’t I?)

But it doesn’t mean it’s not a quality bottle. Barbera makes bright, almost tart, red cherryish wines. The Maraia is more supple than that, and it wasn’t as taut as I expected. Still, the fresh fruit was there (more black cherry than red) and balanced with Italian-style acidity and soft tannins. In all, well made and enjoyable.

Drink this with winter roasts and stews, as well as sausage and red sauce. 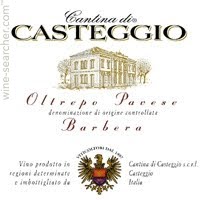 The wine of the week alternates between red and white, with an occasional rose and sparkling. Ideally, where the wine comes from should rotate in the same way, with each part of the world getting its share.

Which, unfortunately, is not how the wine of the week works. There just isn’t enough quality cheap wine from California for it to take its turn, and France is getting closer to California in terms of price and value than I thought possible. Chile and Argentina are becoming increasingly one note and over-priced, so the wine of the week is becoming more Spain and Italy than ever before.

This is not necessarily a bad thing, given that our goal here is to search for price and value and those countries do it better than almost anywhere else. Case in point is the Casteggio Barbera ($9, purchased, 12.5%), another reason why you don’t have to pay lots of money for quality wine.

Barbera is an Italian grape best known for what it does in the Piedmont region, where it’s the second varietal to the more famous nebbiolo, but produces great wines in its own right. The Casteggio Barbera from Lombardi shows why it’s so popular – simple and rustic, with tart fruit (raspberries, cherries?), and light tannins. There is lots of acidity (something barbera is famous for), so this is a food wine and not necessarily something to gulp down when you get home from work. Pair it with sausages and pot roast with a tomato-style gravy.

It's more difficult to make quality cheap red wine than it is to make quality cheap white wine, which is always one of the challenges that the Wine Curmudgeon faces in finding a red to serve as the wine of the week. Complicating the issue this summer is Dallas' record-setting heat wave. I'm dedicated to what I do, but 14 1/2 percent red wines and 105-degree temperatures do not agree with each other, especially when I have to taste three of four wines at one time.

Thankfully, several wine regions still produce lighter and less alcoholic red wines, so I've been touring Spain and Italy this summer. Which, of course, I do a lot anyway, but I've been paying more attention over the last couple of months.

That's how I found the Berro ($10, purchased), stuffed on the shelf at what is probably Dallas' best Italian wine retailer (and wonderfully grungy and old-fashioned as well). It's from the Piedmont region and made with the barbera grape, which produces more rustic kinds of wines.

The Berro fits that description well. It was a little choppy toward the end, with too much oak showing (though that may eventually go away), but otherwise all was as it should be — sour cherry fruit, not especially heavy and low in alcohol at just 12 1/2 percent. The Berro needs food, like barbecue or burgers, and don't be afraid to chill it for 20 or 30 minutes. No, it's a not a fruity, New World-style merlot that you'll hardly notice going down, but that's not what I was looking for.