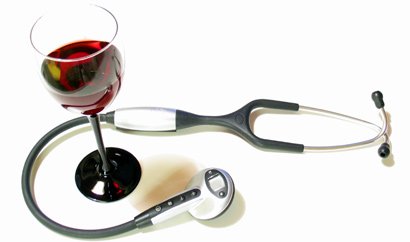 The Wine Curmudgeon, long suspicious of alcohol health studies, is not surprised by one of the latest, which links alcoholism with higher health costs. What is surprising is the headline on the news release: “Researchers put a price tag on alcohol use” – which, of course, has absolutely nothing to do with the study.

First and foremost, let me remind everyone I know first-hand the horrors of alcoholism and abuse. A friend died from them; two more are long-time members of abuse support groups. So I am not making light of alcoholism or saying it isn’t a problem.

Rather, it’s to note, once again, that there is a difference between alcohol abuse and moderate drinking, and which is something that has apparently been shunted aside in the rash of “all drinking is evil” studies we’ve seen over the past couple of years. Drinking is not cigarette smoking, no matter what one study claimed, and drinking wine in moderation is no worse, and may even be more healthy, than regularly eating nitrate-laced supermarket hot dogs. Which, of course, no one has yet done a study about.

This effort, on the other hand, was reaffirming the obvious. Finnish researchers, using what they called a “novel” methodology, say it costs an additional €26,000 (around US$30,000) over five years to treat patients with multiple alcohol abuse factors, such such as homelessness and drug abuse. It also recommends that people with alcohol use disorders should get better treatment for their non-alcohol related conditions.

Which is all well and good, but hardly unusual. So how did the release that ended up in my inbox carry that headline? After reading it, one expects to find the social and health costs of all drinking, moderate and abusive, listed. Which aren’t there and wasn’t the study’s intention.

Maybe the reason is as simple as the headline on the Finnish study being badly translated into English. Maybe it’s nothing more than more bad marketing and public relations work, each of which as gotten progressively worse over the past several years as agencies cut back on employees and training.

And maybe it’s part and parcel of positioning all such studies as being about drinking and doom, and working on the gullibility of newspapers, websites, and the like where the bosses are more concerned with their bonuses than with quality journalism.

I assume it’s one of the first two, and probably the second. I’m terrified it’s the third.