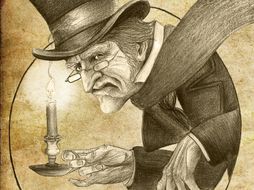 Marley was dead. And good riddance, thought Scrooge. Marley had actually suggested making wine people could afford to drink, and marketing it to consumers who weren’t aging Baby Boomers. Who needs that? sneered Scrooge.

Not him. He was No. 9 on The Most Important and Smartest Wine Geniuses List compiled by one of the wine magazines.

Now, if he could only get rid of that damned Cratchit, his winemaker. She kept insisting on using only pinot noir in the pinot noir and cutting back on the Mega Purple. And she had even been talking using ingredient labels for the wine. Obviously, Scrooge thought, she wasn’t a team player.

Scrooge’s iPhone 11 beeped. The face of a woman appeared with the text. Spam, thought Scrooge, and he deleted it. But the face popped up again.

“Do you recognize me?” asked the face.

Scrooge deleted the text again, but the face was still there. He looked at it, and he remembered his early days at the winery. Man, they had made some great wine then, like those $8.99 California field blends. But what was the point? The wine hadn’t been smooth, so no focus group would have approved.

Scrooge put the phone down, picked up the remote, turned on his 65-inch smart TV. Another face appeared, this time a man with a red beard. “Do you recognize me?” he asked.

Scrooge changed the channel, but the face was still there. Then it faded, and Scrooge saw Cratchit in the winery. She was blending grapes, and Scrooge recognized those damned Rhone varietals she kept trying to sneak in. I told her to dump that stuff, he thought. She knows she is supposed to make merlot, and she also knows it had better be more than a little sweet. Because women don’t like dry red wine.

I guess she didn’t believe me when I told her we only wanted team players, thought Scrooge. And if you’re not a team player, you can look for a job elsewhere – even if it is Christmas and even if you need the health insurance because your son Tim is sick.

Scrooge walked into the kitchen, past the Viking Tuscany range and opened the SubZero Pro refrigerator. He wanted a glass of that fake oak, 15 percent chardonnay that his marketing director said would sell like crazy.

A third face appeared, with glasses, a hat, and a scruffy beard. “I know you recognize me,” said the face.

Scrooge blinked, and then he seemed to be in some sort of home, surrounded by several other ancient winery executives. They were telling stories about the old days, when ordinary people drank wine, and they laughed and smiled and almost cried in their happiness.

Then he was back in his kitchen, in front of the SubZero, and the bearded face was still there: “Well?” it asked.

“I’m just one man,” Scrooge said. “We have to start somewhere,” said the face. And Scrooge nodded in agreement. Maybe those Rhone varietals were a good idea after all.

A tip o’ the Curmudgeon’s fedora to Charles Dickens, who will hopefully forgive me for taking such wine-themed liberties with his story.