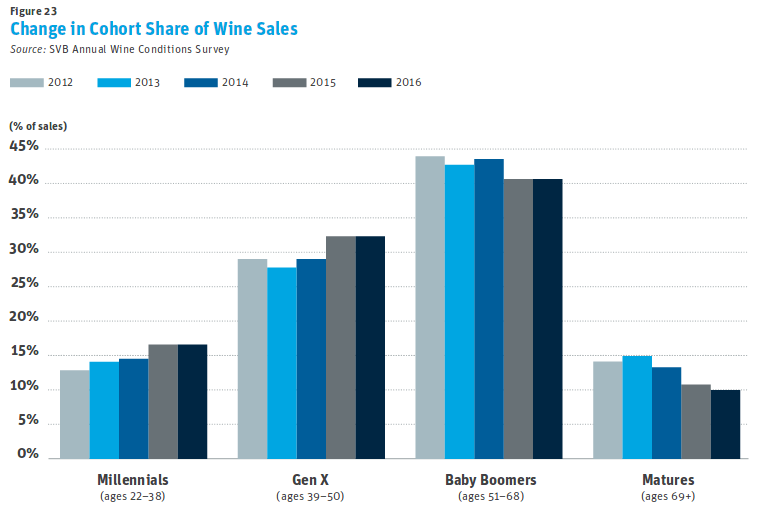 Does the SVB wine industry report show the next stage in the evolution of the U.S. wine business?

Are we watching the next phase in the evolution of the U.S. wine business? Perhaps, if Rob McMillan is spot on with his analysis in the annual SVB wine industry report.

As he usually is.

“Why is growth slowing?” McMillan asked during the report’s webcast on Wednesday. “It’s changing consumer demographics and patterns.”

In this, the Baby Boomers – who have fueled the unprecedented growth in the U.S. wine business over the past four decades – are officially on the wane. Though they still control some 40 percent of the U.S. market, their clout is being passed to the two younger generations. Both Gen X and Millennials are showing market share increases, and their 50 percent total has passed the Boomers (though, in wonderful irony, the vaunted Millenials drink about half as much wine as the Gen Xers). That’s the chart at the top of the post; click on it to make it bigger.

And they don’t drink the same things that their parents and grandparents do, focusing on red blends and, surprisingly, sauvignon blanc, as opposed to the traditional varietals. The red blends, which I’ve written about extensively, were the subject of much discussion and consternation during the webcast; no one was quite sure whether these younger wine drinkers would stay with red blends or switch to the traditional varietals.

• Increasing costs for U.S. producers – land, certainly, but also labor. How this will affect the business remains unclear, although it is one of the factors driving the bifurcation. Producers with more expensive wines can better afford to deal with higher costs.

• Increased competition for wine from craft beer and legal marijuana, and especially among younger drinkers.

• The increasing popularity of low-priced imports, and not just because of the stronger dollar. For example, there is little $10 California rose, mostly because of higher costs, but lots and lots of $10 French and Spanish rose.

Hanging over the entire discussion during the webcast was where Big Wine fits into California’s future. The report expects winery mergers to continue (and the chart in on page 39 detailing winery mergers was as depressing as it was lengthy), but didn’t go much further than that. The webcast’s participants, including several comments from the audience, seemed to imply that Big Wine would define trends in style and that it was up to smaller producers to fill in the areas that were too small or too expensive for Big Wine to worry about. Which is also depressing — letting multi-national companies decided what wine would be made.