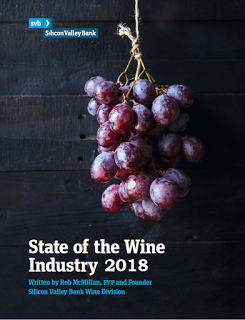 SVB wine forecast 2018: This will be a good year for the U.S. wine business. But what the wine business does next could determine the health and success of wine in the U.S.

The first thing that Rob McMillan said at yesterday’s videocast for the SVB 2018 wine industry report was a warning. How seriously the ostriches in the wine business take his prediction could determine the fate of the U.S. wine business over the next decade.

“I look at the horizon, what’s going to happen,” said McMillan, Silicon Valley Bank executive vice president and the founder of its wine division. “Some people would say that’s a negative way to look at it, because business is good, and 2018 will be a good year. But what’s on the horizon?”

And the answer to that question, as I have written many times, may not be what the wine business wants to hear. It has focused on short-term growth, premiumization, consolidation, and wringing out profits at the expense of value and quality. And guess what McMillan said consumers, including and especially Millennials, are looking for in the wake of those developments?

“Value,” he said, “even at premium prices. It’s what I call the frugal hedonist.”

Where have we heard this before?

In other words, unless the wine business once again embraces value, trouble is looming. Here are some of the numbers in the SVB wine forecast 2018 that led to this perspective:

• The high-powered growth rate for wine costing more than $9, which has been the highlight of premiumization, is starting to slow. This is especially true for wines between $9 and $15, which has been among the fastest growing price ranges.

• The bank’s clients, many coming from California’s top wine regions, have seen sales stall after a string of 10 percent annual bumps almost since the end of the recession. This is especially worrying, said McMillan, and nothing like this has happened since the early 1990s.

• Consolidation among distributors, which has been on hyper-drive for the past 18 months, seems to have hurt retail sales, funneling more business toward the biggest retailers.

• Traffic to tasting rooms in Napa, Sonoma, and Washington state has declined. Which, frankly, is inconceivable to anyone who came of age drinking California wine.

Finally, one bit of good news: Drink local seems to have become an established part of wine, said Mary Jo Dale, the marketing director, Americas, for Vinventions/Nomacorc, and one of the videocast’s panelists.