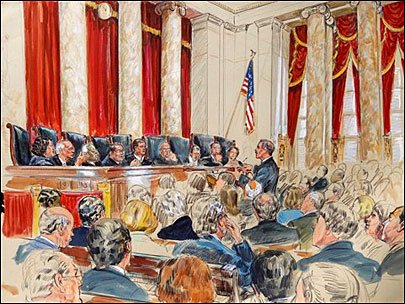 Scalia: “So how does this affect what I buy through my wine club?”

A sharply divided Supreme Court ruled today that wine writing, since it’s mostly about selling wine and isn’t journalism, is not protected by the First Amendment to the Constitution. Instead, said the 5-4 majority, it falls under the 21st Amendment, which allows each state to regulate alcohol sales any way it sees fit, and which makes wine writing part of the three-tier system.

Justice Antonin Scalia, writing for the majority, said: “First, state’s rights. Second, I’m an old white guy and I need to be told what wine to drink. Third, I thought wine writing was already about shilling for the industry.”

Justice Ruth Bader Ginsburg, in her sharply worded dissent, said: “Has Scalia ever actually read the Constitution? Or is he just making this up as he goes along?”

? The National Association of Attorney’s General said it would publish guidelines to help each state regulate wine writing, including recommended winespeak terms and a primer on how to score wines.

? The Pennsylvania Liquor Control Board said it would appoint a committee to take over Dave Falchek’s immensely popular Empty Bottles blog, and that the new version would be distributed through grocery store vending machines.

? The Wine Spectator praised the ruling, and a spokesman said: “We’ll be working closely with our partners in the production, distribution, and regulatory channels to assure that each benefits from the ruling, and especially us.”

? The Texas Alcoholic Beverage Commission said wine writing in the state must now include references to football, sweet tea, and protecting the border. Or else, because its agents are armed. And don’t you forget it.


? Jeff Siegel, who writes the Wine Curmudgeon blog, announced he was giving up wine writing to return to the Burger King on Skokie Valley Road in Highland Park, Ill., where he worked the broiler as a teenager. “Yes, I’ll smell like a hamburger when I’m done with my shift,” he said, “but no will expect me to write that a Whopper has a bouquet of fresh heirloom tomatoes.”

The Court’s ruling came in Bonne vs. Parker, stemming from an incident at the 2014 Symposium for Professional Wine Writers that seemed really important at the time but, like so much about wine writing, is not that big a deal to the vast majority of people who drink wine.