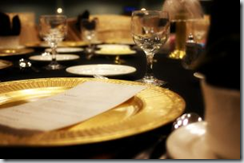 Maybe there is something to this teaching business.

My first class at the Dallas Cordon Bleu took its final Friday, and the results were impressive. The test was simple: Match a five-course meal with wine, and I used dishes that these first-year students had either learned or that had simple ingredients and techniques, like pot roast instead of Beef Wellington.

Their job was not to pick a right or wrong wine. Instead, it was to pick a wine and explain why it went with the dish. In this respect, there were no right or wrong answers. If someone could make an argument for white zinfandel with pot roast, they got full credit. That no one tried to do that also struck me as a good sign.

After the jump, the menu and a look at their choices:

? Proscuitto and melon. The traditional pairing is sparkling wine or champagne, and I got a lot of that. One woman, though, made a case for Rioja, a tempranillo wine from Spain.

? Potatoes au gratin. This preparation has a cheese sauce, which would have given me pause for thought. Most of the students paired it with chardonnay, although some of the more adventurous suggested a lighter red wine. I’d probably lean toward the latter, something that would stand up to the cheese.

? Beef pot roast. Not as many cabernet sauvignons as I would have thought. Mostly merlot, with a smattering of zinfandels and shirazes.

? Baked custard. Sparkling wine for me, thank you, and I got some of that. But I also got dessert wines and even some rieslings.