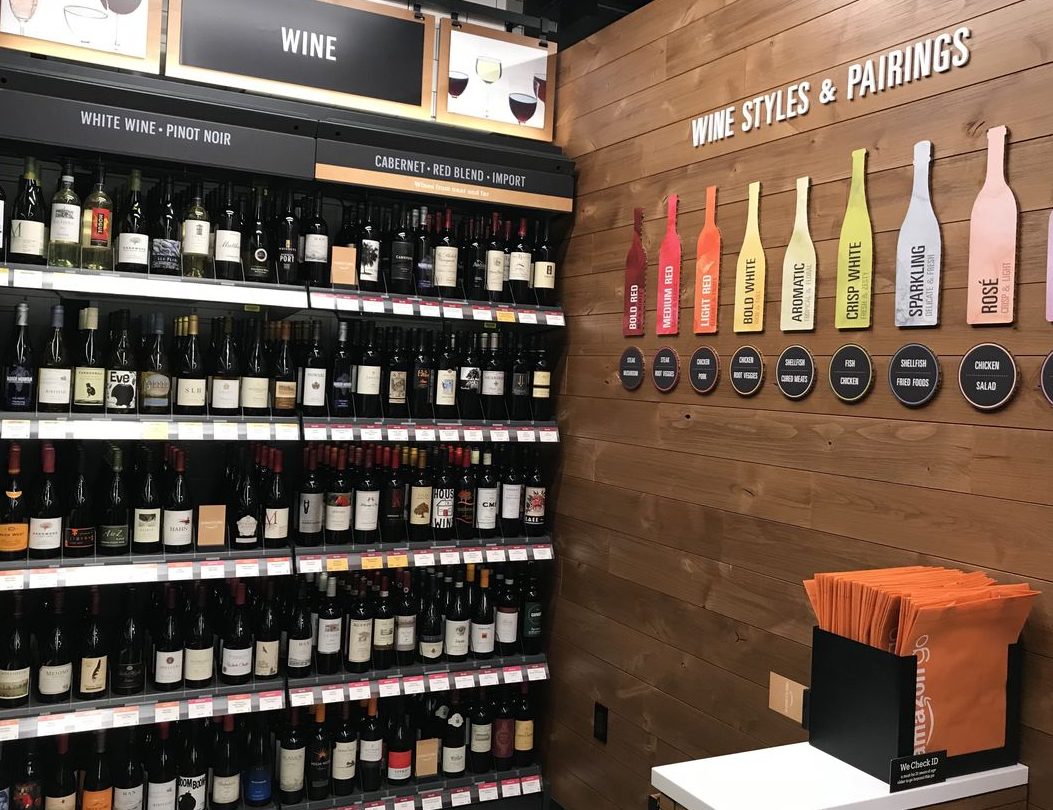 Look at the lower right: In the most high-tech store in the history of the world, “We check ID.”

Amazon’s failure in the wine business, where it shuttered not one, but two sites, might be the only defeat the retail giant has ever suffered. So it’s probably no surprise that its new, revolutionary Amazon Go store, designed without employees or checkout lines and which has panicked every other retailer in the world, does have an employee: To check your ID if you want to buy wine.

Call it the revenge of the three-tier system.

None of the store’s incredible 21st century technology can do the ID job, even though (as described by Ars Technica’s Sam Machkovech) there are so many cameras that it’s impossible not to be seen: “They watch your every move from the moment you walk in and scan your smartphone. Every item you pick up and put down is then tracked to you as an entity – not by your face, but by your body and hands milling about and grabbing stuff.” The system works so well that it even foiled Machkovech’s attempts to steal something.

But not for booze. Writes Machkovech: “The other unusual process involves purchasing alcohol. Amazon Go leaves one staffer in the back of the shop next to a selection of beer and wine in order to check IDs. There was nothing fancy or high-tech about this when I went to peruse the beer.”

Of course, nothing fancy or high tech – because we regulate wine, beer, and spirits using last century’s three-tier system, devised when there were still ice wagons, an orange was an exotic Christmas gift, and nine out 10 rural homes didn’t have electricity.

The Wine Curmudgeon does not advocate underage drinking, and I have always emphasized responsible alcohol consumption on the blog. But – and I know a little about post-modern tech, how this sort of operation works, and a decade’s worth of improvements in ID technology – it’s inconceivable that Amazon didn’t find a way to check IDs using something other than a person. It’s difficult to believe that there’s no way to tie an Amazon account to the person who owns it, so that a 16-year-old can’t pose as someone who is 37.

But it probably didn’t even bother. The failure of both Amazon wine stores taught one of the world’s most powerful and influential companies an important lesson: You can’t beat the three-tier system.