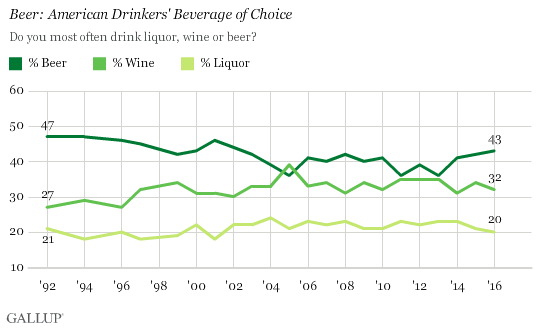 That’s what this Gallup poll seems to say

Beer is the drink of choice for some two-fifths of Americans, down from almost half in 1992. Wine, meanwhile, is preferred by about one-third of us, up from 27 percent over the last 24 years. So wine has really taken off in the U.S., right?

Not necessarily, as this Gallup poll shows. Wine missed its chance to become the U.S. drink of choice just before the recession, when it passed beer and claimed 40 percent of U.S. alcohol drinkers. So it’s not so much a five-point gain since 1992, which isn’t all that impressive anyway, but an eight-point drop in the past 11 years.

And what has happened since then? Premiumization.

I’ve harped on this for the past couple of years, that the wine business can’t charge higher prices for an inferior product – which is basically what premiumization is – without something terrible happening. Gallup, one of the few trusted sources of wine data that isn’t part of the wine business, has pointed out the terrible thing. Wine is losing popularity in the U.S., and the drop mostly coincides with premiumization.

The match isn’t perfect, and there are other factors to consider. One, as the poll analysis notes, is the 400 percent increase in alcohol ad spending over the past 40 years. Most of that is probably for beer, since there is little effective wine advertising, and would why explain why beer has improved its popularity since 2005.

The other key? That “Alcohol producers must compete with an ever-increasing number of producers and a population of drinkers that, rather than expanding, has remained relatively constant for decades.” In other words, more Americans aren’t drinking, despite the country’s population growth. So the only way to make money selling beer, given its low prices, is to sell more beer, and the easiest way to sell more beer is to convert a wine or spirits drinker. But you can make more money with wine by trading wine drinkers up, and the wine business seems happy to do that. That it leaves wine in the lurch doesn’t seem to bother them at all.

One thought on “Has premiumization damaged wine’s popularity?”