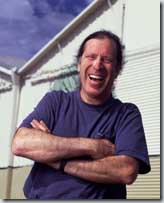 Bonny Doon’s Randall Grahm is one of the legends of the California wine business, a winemaker who was among the pioneers in putting screw tops on quality wine, giving wine clever names, and inventing the modern, no-holds-barred wine label.

But Grahm also makes damn fine wine, whether it costs $10 or five times that . And yes, even the man who gave the world the legendary $10 Big House makes pricey wines. He does it with a style and flair that endears him to those of us who think wine is about more than how expensive it is. This is a man, after all, who once gave a speech called “The Phenomenology of Terroir” for a philosophy symposium at the University of California at Berkeley.

Grahm’s windmills, for there is a bit of Don Quixote in him, are the people who pay too much attention to scores, who worry if what they’re drinking is hip enough for them to drink, and who insist that all wine be over-oaked, over-tannic and over-alcoholic because they read somewhere that it’s supposed to be.

Which makes Grahm the Wine Curmudgeon’s kind of guy — especially after one of the first questions he asked me was whether I realized that wine writers were to blame for much of the woe in the wine world.

Grahm was in Dallas to flog his products for a new distributor, and we had dinner at what seemed a decidedly un-Grahm-like place: An upscale steak house where he was the only one with a pony tail who was wearing paint-stained blue jeans. This will be the first of a three-part series, running each Monday. It is, after all, difficult to contain Grahm in just one blog post.

Our conversation took in most of the issues in the wine business today, from pricing to the multi-national conglomerates that seem to be buying everything in sight to alcohol levels to scores and the wine magazines to terroir and the correct way to farm grapes.

In fact, Grahm does not pull punches. In the past, he has called out critic Robert Parker, perhaps the most important man in the wine world today, saying that Parker’s preferences for wine are the “equivalent of a triple C-cup, without being too crude about it.” He has equally unkind words for the Wine Spectator, the influential magazine that even intimidates some of those multi-national conglomerates.

And then he asked the question about wine writers. Why do wine writers, he wanted to know, continue to toe the party line, to praise these wines even though they are confections? My answer was that there are two kinds of wine writers — those who want to be famous or chic or influential, and so they write what they think people want to read. And then, I said, there are wine writers who will never be famous or chic or influential. Which is where I see myself, as well as many of the wine writers I like and respect. Our job is to taste for the people who read us. Here is what the wine tastes like, we tell them, and we want the readers to draw their own conclusions about whether they like it. I don’t do scores, I reminded him.

Grahm seemed satisfied by this. His point about confections (and I don’t want to get too technical here) is that there are two ways to make wine. You can say, “I want the wine to taste like this,” and then manipulate the grapes — use oak a certain way, use certain kinds of yeasts in fermentation, and the like — to get the wine to taste that way. Or, you can say, “Here are the grapes, and what kind of wine will they make if I let the grapes be what they are?” The triple C-cup wines are made the first way; Grahm’s goal is to produce the next generation of Bonny Doon wines the second way.

Next time: Grahm’s thoughts on selling the Big House brand in 2006 (“Don’t believe everything you read — or that you wrote — about how much money I got”); his take on terroir, and the wine he likes to drink when he isn’t drinking Bonny Doon.