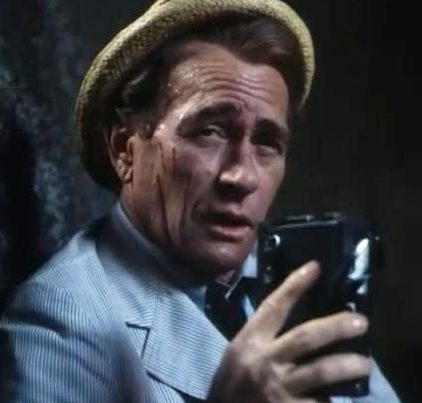 “Judge for yourself its believability and then try to tell yourself, wherever you may be, it couldn’t happen here.”

This year’s annual Halloween post: A terrifying tale about cheap wine and the Parker Monster. Call it Kolchak: The Wine Stalker

Chicago has always been a working class town, a shot and a beer kind of place. So there were some raised eyebrows when people started drinking wine in the Windy City, but hey, what’s the difference between wine and beer? Just another way to enjoy the same vice.

That’s why no one paid much attention when Lee Simcoe opened his wine shop in Rogers Park just before 9 a.m. on a cool October morning and found all of his cheap wine smashed, the broken bottles and the spilled wine in a jagged mess. Kids, he thought, vandals – and that’s the last thought he ever had. Simcoe started toward the back of a the store to get a mop, but stopped. His throat was tight, and he started coughing, like there was something he couldn’t swallow. And the coughing turned to gasping, and he couldn’t get any air. And then the gasping turned to choking, and he clutched his throat and dropped dead.

Vincenzo walked out of his office, looked over the Independent News Service newsroom. “Carl, do you have that story, the one I sent you to City Hall to cover yesterday?”

“Oh yeah, Tony, it’s right here,” and I started rifling through one of the piles of papers on my desk.

“Of course he doesn’t have it,” said Updyke, sitting at the next desk and where everything was arranged more neatly than anyone thought possible. “He didn’t go to City Hall. He was in Rogers Park at that liquor store murder.”

“Tony, I’m telling you, we’ve got something there. How does a normal, healthy, 35-year-old man strangle to death in an empty liquor store? With no marks on his throat?”

“What we don’t have is that City Hall story, eh Carl?” Vincenzo’s face did that thing it does just before he starts the “New York wants us to cover that story and you didn’t do it and now I have to call New York” lecture. Since I had heard it before, there was no reason to listen again.

“I’ll go down to City Hall now, Tony, right away,” and I grabbed my hat, camera, and tape recorder and started easing out of the office. “Have that story after lunch. Or later this afternoon. Or early this evening.”

As the office door closed behind me, I heard a loud, wailing, “Carl….”

I did start toward City Hall, but then the call came over the police scanner, full of static and panic. “Wine bar in Lincoln Park.. officers down…officers down… respond more units…”

When I got there, the SWAT team had established a perimeter, the sharpshooters were on the roof tops, and the cops were wearing gas masks. But that was nothing compared to the half dozen officers in blue uniforms lying dead in the doorway of the wine bar, and all of them looked like they had strangled to death.

I ducked under the police line and started snapping pictures. That’s when a beefy hand grabbed the camera and a muffled voice said, “I thought we had revoked your press credentials, Kolchak.”

“Now why would you want to do that, Capt. Quill? You know all I want to do is to cover a story.”

Quill was wearing a gas mask, too. “Kolchak, get back behind the perimeter. This is a restricted area.” Two of Chicago’s finest grabbed me by the elbows. “I can take a hint, Captain,” and scurried back to my car, parked near where a detective was interviewing witnesses.

I switched on the recorder. “Let me get this straight,” said the cop, looking at his notes. “You’re in the wine bar, doing a Wine 101 class, when the bottles start breaking and exploding? For no reason? And these were inexpensive bottles? Ten dollars or so?”

A woman in her early 20s was crying. “Yes,” she said, sobbing. “It was super awful. And then Dr. Kopin, who was holding the class, started gasping for breath, clutching his throat. And we just ran out as fast as we could, just in time to see the cops do the same thing when they ran in. The same super horrible thing as Dr. Kopin.”

“Wait a minute,” I said. “The cops just started choking? For no apparent reason? All of them?” She nodded yes, stifling a sob, and then broke down completely.

A beefy hand grabbed my recorder. “Kolchak, I thought I told you this was a restricted area,” said Quill, and the two cops grabbed me by the elbows again.

Everyone told me one person in Chicago knew more about cheap wine than anyone else, the guy with the brown hat. I finally found him in a bar near Wrigley Field, nursing an Old Style.

“It’s not safe to drink cheap wine these days, Kolchak. A guy could choke to death.”

“That’s impossible,” I said. “No one chokes to death from drinking wine.”

“Let me tell you a story, Kolchak. Maybe it’s true, maybe it’s not. Let’s say younger people want to drink whatever kind of wine they want, without being told by critics or scores what to drink. Sweet red wine. Rose. Cava and Prosecco. And let’s say the wine business is set up to make them drink wine that has scores and reviews by critics and isn’t cheap, and the dark forces who run the wine business don’t want to change that.

“Very dark forces, Kolchak. Companies worth billions of dollars who have had their way for decades and who keep getting bigger and richer. And let’s say they created something, a yeast-like creature, that can react with the sugar in a wine bottle and blow it up. Or can get inside a person’s lungs, turn oxygen into CO2, and choke them to death. Then you’d have the Parker Monster.”

“That’s crazy. Why would anyone want to do that? Kill customers?”

“That’s the wine business, Kolchak. Constitutionally protected. What difference do one or two customers make in the long run?”

The restaurant was dark, had been closed for hours. I was sitting near the bar, and a trail of bottles, all cheap wine, stretched from the door to where I was sitting – Gascon white blends, Spanish roses, Sicilian nero d’avolas, some $5 Chiantis, and lots of cava.

I waited. Reassured myself that the control was in my lap. And then bottles started fizzing. Rumbling. Bubbling, Bursting. And then they were exploding like dominoes falling, all the time getting closer to me so quickly that I was frozen with fear. My hand wouldn’t, couldn’t, touch the button on the control. My throat started getting tight. I was gasping. Puffing. Wheezing.

One last try, one last burst of whatever strength I had left. I felt the button with my thumb. Jammed it as hard as I could.

The lights, hundreds of them, came on, reflecting off the restaurant’s mirrored walls, blinding the room. I could breathe a little more easily, and as the warm got warmer, I could take a short breath. And when the room became uncomfortably warm, I took two quick breaths, and when it was summer time hot, the glare of the lights so intense I couldn’t look and the sweat beading on my forehead, I took my first normal breath since the bottles started exploding.

Because heat, of course, kills yeast.

I left the lights on for 10 minutes. I wasn’t taking any chances.

Vincenzo didn’t run the story – something about this being even more bizarre than my usual. Which, he said, was saying something.

The guy with the brown hat disappeared. Guess he wasn’t taking any chances, either. And people stopped choking when they drank cheap wine. The cops chalked it up to a gas leak. But I know – and you know – what happened. So the next time you’re enjoying a $10 Spanish tempranillo, and your throat feels tight, turn up the heat. Why take any chances?

A tip o’ the Curmudgeon’s fedora to star Darren McGavin and those who turned a silly TV show into something that was often much more than that. At its best, “Kolchak: The Night Stalker” was part newspaper comedy and horror movie camp while capturing the confusion of the 1970s perfectly. In an era of Nixon, Watergate, Vietnam, and oil shocks, a reporter running around in a seersucker suit chasing monsters made perfect sense.