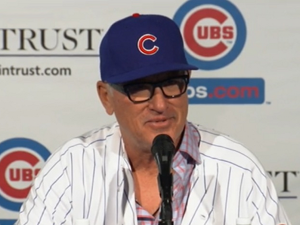 You and I have much in common — you’re the new manager of the Chicago Cubs, and I am a long-suffering Cubs fan who once waited more than an hour to get Kenny Holtzman’s autograph. In the finest Cubs tradition, Holtzman never showed up.


Apparently, we also share wine in common, though what you drink is about as far removed from what I drink as the Cubs are from a successful baseball team. You are, by all accounts, a wine geek of the first order, whose taste runs to Opus One, Insignia, and hot, heavy, oaky California pinot noirs. (Unfortunately, my request to ask you about wine apparently disappeared into the cyber-ether; I never heard back from the Cubs.)

Frankly, your preference for these kinds of wines worries me. This is the Cubs you’re managing, a team that has not won the World Series since 1908, and not the New York Yankees or the Los Angeles Dodgers. The Cubs have had more players like Larry Biittner and Glen Hobbie than Hall of Famers like Babe Ruth and Sandy Koufax, and Opus One is a lot more like Ruth than it is Biittner.


Besides, we’re more comfortable with players like Biittner, who was a mainstay on the woebegone Cubs teams of the late 1970s when I was in college and would sit in the right field bleachers and offer the players various words of encouragement. Who can forget the 1977 game when Biittner, an outfielder, pitched 1 1/3 innings and the Cubs lost 19-3 — and, in the finest Cubs tradition, was fined for throwing at a batter.

In this, the Cubs are more Bogle than Insignia, more cava than Champagne. And that’s a more practical approach anyway. What are you going to do after a tough late-night loss to the hated Brewers in Milwaukee when you want a glass of wine and you won’t be able to find a bottle of $50 Napa meritage? On the other hand, almost any Roundy’s supermarket that’s still open will have more than one wine from this year’s $10 Hall of Fame.

Which is not to say I wouldn’t mind sharing a bottle of white Burgundy with you, particularly if you do the impossible and help the Cubs win something after more than a century of losing. I’d even pay for it — a 2010 Corton from Sylvain Loichet, perhaps? That I’m willing to pay for it should tell you how long suffering a Cubs fan I am.


Until then, try the Little James Basket Press wines. I’m sure Binny’s has them, and will get them for you if they don’t.

Yours in 107 years of Cubs futility,
The Wine Curmudgeon

2 thoughts on “Joe Maddon, expensive wine, and the Chicago Cubs”