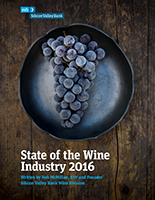 That’s the question that the annual Silicon Valley Bank state of the wine business report addressed last week, and the answer? It does look like the U.S. wine boom is over — for now, anyway. And though Rob McMillan, who writes the report, was optimistic that the slump may be short-lived, the fact that he cut through the usual pom poms and short skirts that pass for wine business analysis speaks volumes about how serious the situation is for anyone who loves wine.

The report predicts a decline in U.S. per capita wine consumption after more than 20 consecutive years of growth, and while overall sales in dollar terms will increase slightly, sales measured by the amount of wine sold will remain flat for the fifth year in a row. That is also the end of a two-decades-old trend; after sales bottomed out in the early 1990s, they increased annually, even through the recent recession.

McMillan points to three reasons for the change:

• The collapse in sales for wine that costs less than $6 a bottle, the boxes and jugs of Almaden and Carlo Rossi that have been some of the biggest cash cows in wine retail history. “That market is gone,” he said during the report’s webcast last week, “and it’s not coming back.” Yes, consumers are buying more expensive wine, but not as many of them are buying wine overall, and premiumization seems to stop at $15. There is little evidence that anyone is trading up higher than that.

• Competition from craft beer and spirits, which are more appealing to younger consumers. The report didn’t go into detail about why they’re more appealing, but as a 20-something woman told me the other day (and she worked in a wine shop): “Wine is such an anachronism.”

• Generational change, and McMillan said what few others in wine want to admit publicly. The Baby Boomers who powered the 20-year wine boom don’t drink as much as we used to, and we’re going to drink even less as we age. Meanwhile, the Gen Xers and Millennials aren’t making up the difference, whether because they’re drinking craft beer or can’t afford to. I talked to McMillan after the report came out, and he was blunt: “The Millennials are not going to spend the money on wine that the Baby Boomers did.”

In fact, most news reports of the study downplay that bit about the Millennials, who are supposed to be the wine business’ savior. But anyone who is clear-eyed about the economy understands that that may not be possible. First, this isn’t the 1990s, when the gross domestic product grew three to four percent a year. Second, the Millennials, for all the talk about peak earning years, don’t have access to the same high-wage jobs the Boomers did 20 years ago. And third, without those high-wage jobs, they will have even more difficulty paying off an unprecedented $1.3 trillion in college loan debt. All of which means it’s more likely they’ll buy a $5 craft beer instead of a $15 bottle of wine.