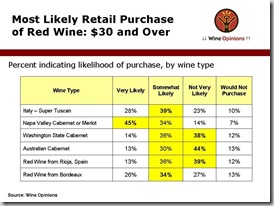 John Gillespie, whose company conducted the survey, says that Wine Magazine influence — which holds Napa cabernet in almost ridiculously high esteem — accounts for some of those numbers. But he notes that that isn’t the only reason.

? Napa wines, though overpriced, aren’t as overpriced as similar Bordeaux wines. So, in that respect, Napa still offers value.

? It’s easier to buy Napa wines in the U.S. than it is Bordeaux wines. All things being equal, consumers will buy what’s on the shelf.

? These consumers are more likely to have visited a Napa winery, and that’s a powerful inducement to keep buying the winery’s product. Why take a chance on a $30 Rioja when you’ve been to the place where the $40 Napa cab is made?