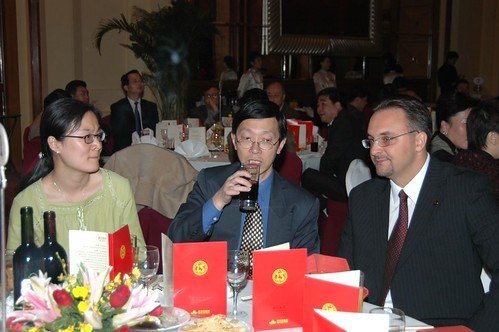 Please, neo-Prohibitonists: Stop these people before they binge drink again.

Yet another booze study characterizes responsible behavior as binge drinking

Another studying demonizing drinking showed up last week, replete with the flaws that have come to characterize these studies. The authors cherry-picked their study group, ignored relevant statistical data, and glossed over any socio-economic and demographic explanations for their conclusion. The result? Old people! Binge drinking!! Death!!!

The other thing that struck me about the study was its definition of binge drinking: four to five drinks in one sitting. In other words, drinking wine with dinner has become just as evil as frat boys chugging Everclear and men of a certain age pounding a six-pack after work and then passing out on the sofa.

My name is the Wine Curmudgeon, and I am a binge drinker.

On Saturday night, I had five glasses of wine with dinner. We had hard-cooked eggs in mustard sauce for a first course, followed by a mock cassoulet (turkey, sausage, a duck leg/thigh, and white beans) served with rice and a cabbage salad. I opened the $10 Pigmentum Gascon white blend with the eggs, which was a terrific pairing (the wine’s citrus fruit complementing the richness of the egg). I drank the fabulous 2011 Bonny Doon Bien Nacido syrah with the cassoulet, and it was an even better pairing – dark, earthy food with a dark, earthy wine.

So how did a full dinner eaten over two or three hours with five glasses of wine turn into binge drinking?

Your guess is as good as mine. The five-drink definition (four for women) comes from the National Institute for Alcohol Abuse and Alcoholism: Binging is “a pattern of drinking that brings blood alcohol concentration (BAC) levels to 0.08 g/dL This typically occurs after 4 drinks for women and 5 drinks for men – in about 2 hours.”

Not coincidentally, that 0.08 number is the legal definition of drunk driving in 49 states. If it’s illegal to drive after five drinks, then it’s easy to call something binging. Or, conversely, let’s lower the legal blood alcohol level to 0.08 since the experts call that binge drinking.

And do not think this is an apologia for alcoholism and drunk driving. I know first-hand the horror and pain of each. Rather, it’s a plea for a measured, reasonable, and rational approach to solving the problems they cause.

That’s because drinking is not the problem. Abusing alcohol is the problem. Trying to shame responsible adults into stopping behavior that isn’t shameful won’t do much to stop alcohol abuse. Didn’t the neo-Prohibitonists learn anything from Prohibition? Hopefully, they’ll eventually figure this out. Until then, I’m happy to do my part to explain it to them.

Photo: “company dinner” by Rivard is licensed under CC BY-ND 2.0

3 thoughts on “Has wine with dinner been turned into binge drinking?”