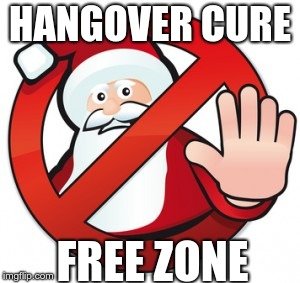 The annual  PR hangover cures offensive is here again, and it’s as annoying as ever

This holiday season, my in-box has overflowed with emails for hangover cures. Any number of experts claim to have figured out how to fix the headaches, nausea, and overall green feeling that comes with too much alcohol.

In fact, one expert has published a book detailing his remedy, and the effort got a moderately favorable review in the Sunday New York Times book section. Which, to be honest, might be more impressive than discovering an effective hangover cure.

For some reason, hangover cures have been all the rage for the past couple of years. Drink this. Eat this. Follow this routine. Each solution is supposed to do for hangovers what penicillin did for venereal disease, and the hangover experts have the anecdotes, surveys, and assorted facts and figures to support their claims.

What none of them apparently have, of course, is any scientific evidence. But, as has been noted on the blog many times, what does science matter when it comes to booze and our health?

That’s because, scientifically, the only way to cure a hangover is not to get one. Or, as I used to tell my El Centro classes in the alcohol and health lecture, “Drink in moderation.” Even the hangover book author sort of acknowledges this, noting that alcohol causes several physical changes in the body, and that too much drinking involves psychological factors as well. Which is a difficult hurdle for one pill or potion to overcome.

The other thing that baffled me about all of this? Americans are drinking less now than ever, so why the increase in hangover cures? One would think, in the post-modern world of designated drivers, increased police scrutiny, and improved alcohol education, there wouldn’t be much need for a hangover cure. But again, the relationship between health, alcohol, and reality is never quite what common sense says it should be.

One thought on “Hangover cures: The worst part of the holiday season?”