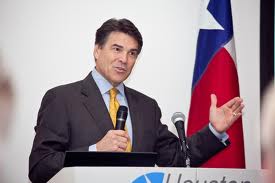 Perry: “Give us your high-dollar wine innovators, yearning to breathe free of taxes.”

Texas Gov. Rick Perry, calling California a bloated, over-sized mess of a state where the gummint makes it impossible to do bidness, said today that all of California’s 3,400 wineries should move to Texas.

“Building a winery in California is next to impossible,” said Perry, marking a whirlwind tour of the state’s leading wine appellations. “That’s why I’m here — you fish where the fish are. You’re at a tipping point in California from the standpoint of high-wealth wine innovators. Many are looking for somewhere else to go, and we’d like them to consider Texas.”

• Special appellation laws so that Napa and Sonoma wineries that move to Texas can still label their wine Napa and Sonoma. “It’s all about getting gummint out of the way of bidness,” he said. “Who are we to tell entrepreneurs how to run their wineries?”

• Elimination of the state’s three-tier system, allowing the relocated wineries to sell their wine to whoever they want, where they want, and how they want. “Gummint red tape and bureaucracy stifle bidness, and we don’t let that happen in Texas,” he said.

• Repeal of Texas’ environmental and labor regulations, allowing the re-located wineries to ignore federal EPA and hiring and firing rules. “It’s not like we had many of those to begin with,” said Perry, “so it was no trouble at all to get rid of them.”

Reaction from California was swift, coming as it did after the state’s unsuccessful plan to let its wine regions secede from the United States. Said Gov. Jerry Brown: “I used to date Linda Ronstadt. And he presumes to tell me how to run the state? Who has he ever dated?”

In Texas, the legislature, debating whether it should offer Texas A&M tax incentives to re-join the Big 12, issued a statement saying that wine was fine as far as it went, but that it would never replace sweet tea and Dr Pepper in the hearts and minds of real Texans.

The Texas wine industry, which lost its state funding for research and marketing after a Perry budget edict in 2011, said through a spokesman that it completely understood the governor’s plan and would stand in the corner and not make any noise or complain in any way.

7 thoughts on “Gov. Perry to California: Bring your wineries to Texas”