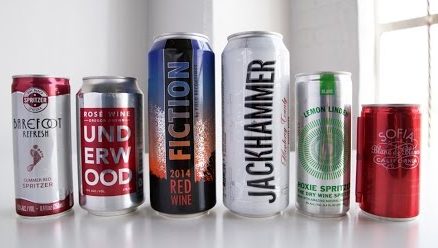 People who are supposed to know these things insist that wine packaging is about to undergo a revolution – specifically, that canned wine is the next big thing and will sooner rather than later compete with bottles as the package of choice.

In this, they are wrong. Wine packaging has remained the same for centuries – a bottle with a cork – and there is absolutely no reason to believe that canned wine’s future is any different than screwcaps or boxes. It will occupy a niche, and lots of people will like it. But most of us won’t even notice it. The wine business in the U.S. has spent almost 100 years teaching us that we have to buy wine in a 750 ml bottle with a cork, and you don’t undo that overnight.

Or, as one of the more clear-sighted analysts wrote: “In most countries, that packaging (whether it’s a $5 or $5,000 wine) is going to be a glass bottle, even though any number of containers can be used.”

So why the enthusiasm for canned wine? First, because it has grown exponentially over the past couple of years, up 125 percent in the year through the middle of 2016. Second, it’s something that should appeal to the two generations of wine drinkers younger than the Baby Boomers, who grew up on canned soft drinks and juice boxes and who aren’t supposed to be as fussy about bottles as the rest of us. Third, because the people who do trend analysis wouldn’t have anything to write about if they didn’t find a trend, and it isn’t easy to find trends in an industry as old-fashioned as wine.

In fact, here’s what the prognosticators don’t tell you about canned wine:

• “After years of packaging innovations, the traditional 750 ml wine bottle is more important to the domestic wine industry than ever.” The number of 750ml bottles sold increased 41 percent from 2010 to 2014, which is the same period that overall wine sales in the U.S., as measured by bottles sold, was up just 11 percent. This is premiumization’s work; who is going to pay $25 for a bottle of wine in can or box? Meanwhile, sales have fallen dramatically for the very cheapest wines, which lend themselves best to cans.

• That 125 percent growth was from a very tiny base. All told, canned wine accounted for $6.4 million in a $55 billion business, or about one-tenth of one percent.

• Retailers don’t like canned wine. Store shelves are designed to sell 750 ml bottles, and canned wine doesn’t fit on the shelves. That’s what happened to boxed wine, which was supposed to be the next big thing a decade ago. Retailers could never figure out how to display it, and so they shoved it to the back of the store.

• Canned wine hasn’t solved the value/price problem. Much of it is more expensive than bottled wine, since we’re paying for convenience. But the quality of the wine usually isn’t worth the added cost. Much of the canned wine I’ve tasted was junk that would cost $4 or $5 for a 25-ounce bottle, not $5 for a 12-ounce can. Compare this to boxed wine, which has improved in quality and does offer value – and still remains a small part of the market, about three percent.

In the end, know that screw caps, which offer as much convenience as a can without any added cost to the consumer, have been around for decades. And they still account for just 20 percent of the market. How are cans going to do better than that?

4 thoughts on “The future of wine packaging”