Wine on the Fourth of July, you ask? And the Wine Curmudgeon asks, why not? What pairs better with barbecue, grilled chicken and other July 4-style foods?

Here are three wines that will go with whatever is on your Independence Day Menu: 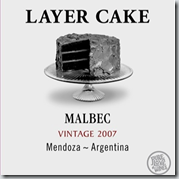 ? Layer Cake Malbec 2007 ($16): I really didn’t want to like this, given the label — a picture of a chocolate layer cake. But it’s among the best malbecs, the national wine of Argentina, that I’ve tasted in a long time. It’s dark for a malbec, with an almost bacon fat smell, but still had lots and lots of typical blueberry fruit. In some ways, the style was more French with Argentine. I drank it with smoked chicken, and it was a winner. There are two other Layer Cake releases, a primitivo and a Cote du Rhone. Both are well-made wines, but I liked the malbec the best,

? Red Hot Mama NV ($10). I came across this New Mexico wine when I was judging in Taos, and was pleasantly surprised. Most regional wine at this price is either sweet, not well made, or both. But the Mama is a light, easy-drinking wine, a mostly cabernet sauvignon blend that has an almost Beaujolais-like softness. If you don’t live in New Mexico, you can order it from the winery. Serve it with barbecue, and especially pulled pork.

? Espelt Corali 2006 ($10). Yet another terrific rose in a year of of terrific roses. This Spanish wine is a marvelous pale pink color, and is exceptionally dry and stony — just what I like about Spanish roses. Drink it chilled while you’re watching the fireworks or with grilled vegetables, burgers or hot dogs.