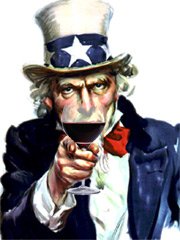 What do many of us do when we celebrate a birthday? Drink wine, of course, whether it’s for a toast or for a birthday dinner. So why not do the same thing when the United States celebrates its birthday?

Best yet, the Fourth of July is a terrific porch wine holiday, a concept that doesn’t get enough attention in our rush to drink as much heavy, over-oaked, and too much alcohol wine because our wine betters tell us we’re supposed to.

So consider these wines as a starting point for your July 4 celebration (and all with a July 4 connection):

• Listel Grain de Gris Rose 2014 ($12, purchased, 12.5%): This very pale rose, from Camargue in Van Gogh country in the south of France, is unlike almost any French rose I’ve ever had. There’s freshness and lots of soft strawberry fruit, but it’s not crisp or tart. Having said that, it’s still fun to drink, and the bottle is gone before you realize it. And, of course, we wouldn’t have won the Revolutionary War without French money, troops, and ships.

• Mumm Napa Brut Prestige NV ($20, purchased, 12.5%): Tried and true California sparkler with firm bubbles and apple and citrus fruit — and is widely available. Price isn’t bad, either, given how ridiculous most Champagne prices are.

• Pedroncelli Sauvignon Blanc 2014 ($14, sample, 13.4%): This California white is only going to get better with age, and it’s well done now — aromatic grassiness and some citrus, plus clean, crisp, and a solid finish.

• Baron Amarillo Rioja Reserva 2010 ($10, purchased, 13.5%): This Spanish tempranillo — Spain being another important U.S. ally in 1776 — has lots of oak and cherry fruit in some sort of balance, though not as subtle as more expensive reservas. Still, better than most of the world’s $10 wine, and just what you want for a July 4 barbecue.