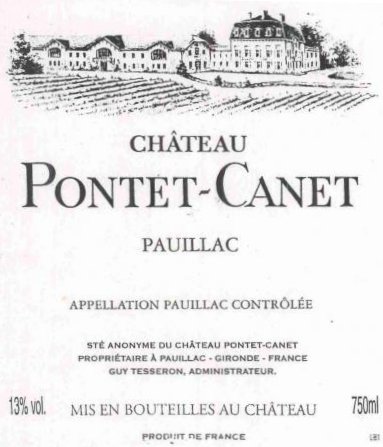 How silly are Bordeaux wine prices? The Big Guy, who bought the Chateau Pontet-Canet 2003 (13%) almost 10 years ago, should have kept it in case he needed to top up his grandchildren’s college fund. The wine has doubled in value since he paid $60 for it at a Dallas wine shop.

Wine as investment is an alien concept to the Big Guy and I. We buy wine to drink, which is why any review of the Chateau Pontet-Canet has to take into account its ridiculous run-up in price. What’s the point of a $120 wine, even from a producer as reputable as Pontet-Canet — a fifth-growth estate in the 1855 Bordeaux classification that’s often compared to second growths — that doesn’t make you shiver? Because, as well made as it was, and as well as it has aged, and as much as we enjoyed it, it was worth $120 only if the person buying it wanted to flip it like a piece of real estate.

Which you can’t tell from its scores — proving, sadly, that the idea of the Emperor’s New Clothes is never far from wine and that scores can be as corrupt as a Third World dictator. That’s because the only way to keep the market going is to keep throwing lots of points at the wine, which seems to have happened here. I found lots of mid-90s, with nary a discouraging word.

If you get a chance to try it, the Chateau Pontet-Canet has more fruit in the front (blackberry and raspberry) than you’d expect, and which explains Robert Parker’s fondness for it. The tannins were very soft, and the acidity was muted, almost an afterthought. If you sniff really hard, you can smell graphite, which makes the pointmeisters go crazy. The finish is long, but not extraordinarily so, and the impression is of a quality wine that would be a steal at $40 or $50. But memorable, as one reviewer described? Hardly, unless you’re marveling at the demand for a $120 wine that was made 12 years ago.

Again, this is not to criticize its quality, but to note how little the Bordeaux market has to do with reality. You could buy four terrific bottles of Chablis for the same price; three bottles of a Ridge zinfandel, maybe the best value in the U.S.; or two bottles of Pio Cesare Barbaresco, one of the best wines I’ve ever tasted.

If and when the French understand this, they’ll understand why 90 percent of the world is priced out of Bordeaux. Until then, I’ll somehow live without it.