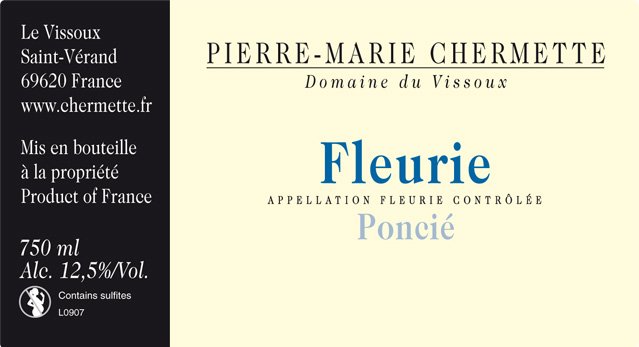 Wine geeks get teary-eyed at the mention of high-end Beaujolais, and not just because they’re usually the only ones who know about it. Their argument: That Beaujolais that isn’t the $10 stuff that the Baby Boomers grew up on can be as subtle, interesting, and sophisticated as any great wine, and often at half the price.

The catch, of course, is that there isn’t much high-end Beaujolais, called cru Beaujolais, for sale in the U.S. and it’s not so cheap as to be a great deal compared to other great deals, like Rioja. So even if you find one, how do you know if you should buy it if there isn’t a wine geek handy?

Which is where a knowledgeable retailer comes in, like Cody Upton at Pogo’s in Dallas, who sold me the Pierre-Marie Chermette Fleurie Ponci ($32, purchased, 12%) for a BYOB dinner with the Big Guy. Because, given the price and how little I know about high-end Beaujolais, I wouldn’t have bought it. There’s plenty of sparkling, some white Burgundy, lots of quality Rhone and Rioja, and even California red and white at that price that I know and enjoy.

But I trust Cody, and the Poncie, a red wine from France, shows why. It’s not so much that it was delicious, or that the Big Guy marveled at what it tasted like. Rather, it showed that wine geeks can be right, and that just because a wine is made with the sadly unappreciated gamay grape and comes from Beaujolais is no reason to dismiss it. Cody said this is one of the great Beaujolais of the world, and he was right.

Look for a violet sort of aroma, lingering soft berry fruit, and even some earthiness, which I usually don’t associate with Beaujolais. In this, as with all great wine, the whole is greater than the sum of its parts, and maybe one day I’ll figure out how great wines do that.

Highly recommended, and especially with Mother’s and Father’s Day coming up. Interestingly, it needs food, despite its soft fruit and cushy tannins — almost any roast meat, cheese courses, and even pate.

Post sponsored by Famous Smoke Shop
This red wine from France can be paired with a great puro Nicaraguan cigar, which is masterfully crafted by one of the industry ?s most celebrated manufacturers, Davidoff. Famous Smoke Shop suggests that this be paired with the Toro size of the Davidoff Nicaraguan. This cigar is a beefy 5 inch by 54 ring gauge. The smooth creaminess this smoke includes will marry perfectly with the wine’s earthiness. Purchase Davidoff and other premium cigar brands from Famous-Smoke Shop.