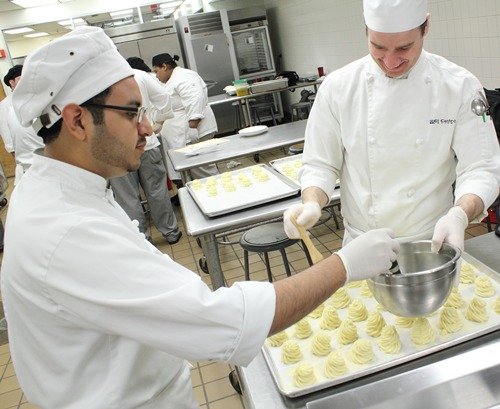 “I’m being more adventurous in my wine drinking, Mr. Siegel,” a former El Centro student told me a couple of weeks ago. I was practically giddy; she had started the class convinced she preferred sweet wine, but has taken to heart the only advice about wine that really matters, despite the volumes of foolishness we must endure: Drink what you like, but be willing to try different kinds of wine. Which, I must confess, I repeated a time or two during the semester.

So far, this semester’s class looks like it might be more of the same. This is not necessarily because the Wine Curmudgeon is a brilliant teacher, but because my students are eager, inquisitive, and ready to throw off their wine business-imposed chains. One student, when we were discussing terroir, understood the controversy perfectly. “If you’re a Big Wine company,” I asked them, “and you have a choice between making distinctive, terroir-driven wines and making wines that taste the same regardless of where they’re from, but which you think will sell better, what would you do?” “Make wines that taste the same,” she said. “Isn’t it about making money?”

Take that, Winestream Media. They can see through your pretense. The other impressive thing? That these students are willing to taste wine when we don’t do it in class. This has traditionally been a problem when I teach a wine class. When 20-somethings go out, they don’t want to do homework, even if it involves drinking wine. But after three weeks, this class is drinking when they go out and when they’re at home. And then we’re talking about whether the wines they buy are a value, something else that practically makes me giddy.

I’ll write more about the class later in the semester, but I want to add this now: The difference between talking about wine with young people who don’t know everything, but aren’t bothered by it, and talking about wine with people my age, including the infamous old white guys, is the difference between a $10 Hall of Fame wine and grocery store plonk. And everyone knows which I prefer.

One thought on “El Centro wine class: A new semester”