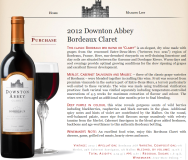 Let’s get the review of the Downton Abbey claret ($17, purchased, 13%) out of the way first: I liked it. It’s a Bordeaux blend with some blueberry fruit and a rough, gritty style that’s typical of cheap French red wine, the sort of thing I’ve been drinking most of my life. In other words, plonk.

The catch, of course, is that it isn’t cheap, costing about twice as much as it’s worth. But that’s the point, isn’t it? That $17 pays for more than the wine. It pays for the experience, and that’s what Carnival Film & Television Ltd., the show’s producers, are counting on. That, and that wine drinkers are as stupid as we’re supposed to be.

This is not a rant about TV and movie tie-ins; I own a Captain Kirk action figure and two Star Trek coffee mugs, and I’m proud of it. Rather, it’s about the wine business and the way it insults the intelligence of its customers, something that we see all too often. Call it celebrity wine or cult wine or whatever, it’s based on the assumption that wine drinkers don’t know anything about quality. Flash a shiny object in front of us, and we’ll reach for the debit card every time. Which, as regular visitors here know, is an attitude that makes me crazy.

And I got crazier reading the claret’s back label and promotional material. To paraphrase Dashiell Hammett, “I was trying to count how many lies could be found in them, and had reached four, with promise of more. ?”:

? This “is an elegant, dry wine. … ” “… with a silky finish.” Dry yes, but about as elegant as a summer day in Dallas and as silky as late-night diner coffee.

? The wine is made with “grapes from the renowned Entre-Deux-Mers (‘between two seas’) region of Bordeaux, France.” Yes, Entre-Deux-Mers is in Bordeaux, but it’s hardly renowned for claret, or even red wine. It’s a bulk wine region with some decent, cheap whites, more or less the French equivalent of California’s Central Valley.

? The wine was put together by a negociant, Grands Chais de France, founded in 1979, hardly “one of France’s great Chateaux.”

? Perhaps the worst: that the claret is age-worthy. It will age about as well as any other $8 wine, which means not at all. Legitimate claret, writes British wine critic Tom Cannavan, “can be the epitome of fine wine. The best wines exhibit a wonderful complexity of aromas and flavours, great elegance and refinement and an ability to age gracefully — some for a hundred years.” This ain’t that.

All of this is about words and terms that most consumers expect from wine in the vague way we do, but know very little about (because, of course, the wine business doesn’t care about wine education). Great wine is supposed to age, but most of us have never had an aged wine and don’t know why it makes a difference. Great wine is supposed to be elegant, but how many of us could describe what an elegant wine tastes like? And to expect most of us to know Entre-Deux-Mers is cynical even for a TV tie-in. No doubt the marketing types figured it was French, and that would be enough for the stupid Americans.

If Carson served this wine at a Downton Abbey dinner, he’d get a proper talking to; Hudson never would have let it in the house. If you want quality claret-stye wine for about $17 while watching the fourth season, try Bonny Doon’s A Proper Claret or Hess’ Treo Winemaker’s Blend. Or, if you want to spend $8 or $10, there’s Little James’ Basket Press Red, the kind of wine that entitles you to giggle at others who spend more for lesser quality because someone flashed a shiny object in front of them.