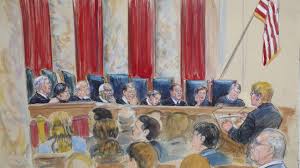 So tell us, Wine Curmudgeon, why should we allow direct shipping?

Why can’t we buy the wines we like via direct shipping? What’s so evil about that in the second decade of the 21st century?

This is the second of two parts looking at how the century-old three-tier system still prevents us from buying wine on-line or from out-of-state retailers, hamstringing 21st century technology and sensibility. Today, part II: Dear Supreme Court: Please fix three-tier and allow direct shipping. Thursday, part I: The Supreme Court’s 2005 Granholm decision, and why it didn’t change three-tier as much as everyone hoped.

Yes, I know you’re busy. And yes, I know you are facing immense constitutional decisions that could alter the future of the republic. Still, it’s not like this one isn’t important, either: Please fix three-tier, so we can buy wine on-line and from out-of-state retailers.

I ask this not just to make it easier to buy $10 Gascon wine. I ask this because wine drinkers should be able to buy whatever they want, and not the wines that multi-billion dollar wholesalers and retailers allow them to buy. Because that’s the way the system works now – three-tier says each wine has to have a distributor in every state, so if a distributor isn’t interested in the wine, we’re out of luck. And since big distributors and big retailers want the same boring wines, we’re doubly out of luck.

How bad has the situation become? First, as you know, lower courts are not exactly sticking to your decisions. Shortly after you ruled that states couldn’t forbid non-residents from getting a retail liquor license in the Tennessee Retailers case, a federal appeals court upheld a law that said an Indiana resident couldn’t get a license to sell wine in Michigan. Talk about disrespect.

Second, I’m getting more complaints about availability than ever, and it’s not like I write about weird wines made with weird grapes. No natural or orange wines on the blog, and certainly nothing from places like Georgia. Instead, wines from the five or six biggest producing countries in the world, made with reasonably common grapes — and that I have bought so I know that they are available somewhere. My mantra has always been: An independent retailer in a good-sized city should be able to sell readers the wines I write about.

But that seems to be less applicable as wine consolidates. A reader wrote the other day that he couldn’t find a California wine in California, and his search included an independent retailer. Even worse: another reader, no doubt more frustrated, asked if I could cobble together some sort of retail network for the blog’s wines. This is what it has come to, dear justices – someone wants the Wine Curmudgeon to sell wine. And I can’t even figure out a way to sell t-shirts.

So please do something, sooner rather than later (though I would be happy with later). In fact, it almost doesn’t matter if you decide to forever forbid retail to consumer shipping. It’s a decision, at least, and as bad is it would be for wine, it’s still better than what we have now. Which makes everyone crazy save the people who benefit from it.