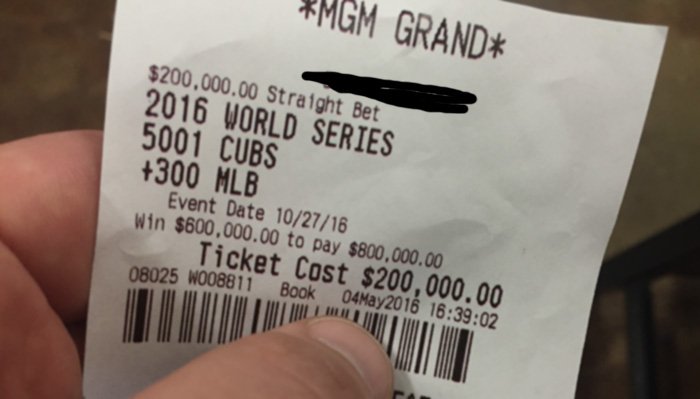 No, that’s not the Wine Curmudgeon’s betting slip on the Cubs.

This week, my beleaguered and bedraggled Chicago Cubs took the first step toward ending their 108-year World Series drought. The Cubs clinched the National League’s central division, which means they need to win just two playoff series to advance to the Fall Classic.

Hence it’s time for me to start looking for wine to buy if I get a chance to celebrate a Cubs’ World Series victory. Regular visitors here know this not putting the cart before the horse; I have been a Cubs fan too long for that. And, as my brother has reminded me this summer, this is the Cubs we’re talking about.

Rather, this is about enjoying what is certainly the best Cubs’ team of my lifetime, even better than the mythic 1969 team of Banks and Santo and Williams; the surprising 1984 team with Ryne Sandberg, perhaps my favorite Cub ever; and the star-crossed 2003 Bartman Cubs. If the North Siders are this close to doing something that most of us never thought possible, then I’m going to go wine window shopping. Besides, I promised to splurge if the World Series drought ever ended.

My thanks to Robert Pennington of Pogo’s in Dallas, who walked me through the store’s very nice French wine selection to put this list together. Robert grew up a Cubs fan in Fort Worth, and seemed to have as much fun doing this as I did.

My requirements? Try to spend around $100 a bottle, since anyone can pay $800 and get a nice wine; French, because that’s the expensive wine I enjoy most; and availability. What if I want to buy two or three bottles?

• Chateau d’Issan 2006 ($99), a third growth red Bordeaux from Margaux. Legend has it that Issan was served at the marriage of Eleanor of Aquitaine and England’s Henry II in 1152. Given all of that, said Robert, $99 is a value.

• Domaine de Courcel Grand Clos des Epenots 2010 ($110), a premier cru red Burgundy. That means pinot noir from what’s considered the second best classification from Pommard in the Burgundy region. Pommard is probably my favorite red Burgundy, but it’s so expensive that it has been years since I had any,

• William Fevre Bougros 2013 ($119), a grand cru — the highest level of quality — Chablis. That’s also chardonnay from Burgundy, but without any oak aging since it’s from the Chablis region. Robert was very excited about the wine, and Fevre is a terrific producer.

5 thoughts on “If the Cubs win: Picking a wine for the celebration”