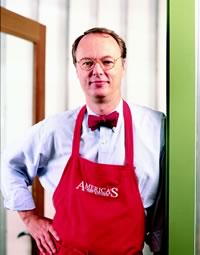 Good news for those of us who care about wine. The past decade’s enthusiasm for food and home cooking, which has given us the slow food, local food, and the farm to table movements, as well as consumers paying attention to how their food is made, could soon come to wine.

“The problem,” says Kimball, “is that wine is too complicated. But someone will probably come along and fix that.”

His perspective is worth paying attention to, if only because Kimball is an intelligent and successful food person who says he was always confused by wine. Are you listening, Winestream Media?

“Wine is where cooking was in Julia’s era,” says Kimball, who was friends with Julia Child, the U.S. cooking icon. “It’s a hobby. If you tried to make one of Julia’s recipes, it could hard and complicated. That’s where wine is. It’s confusing and incredibly complex. Beer is simple. Wine isn’t. There are scores and terms and regions to learn. Does the difference between Bordeaux and Burgundy really matter to most people?”

Hmmm. We’ve heard that before, haven’t we?

But Kimball, who finally got a handle on wine by forgetting the complicated stuff and focusing on what he wanted to drink, says wine is on the cusp of where food and cooking was at the end of the 20th century. That’s when the Food Network, a renewed interest in quality ingredients, and more people with more time to cook, made extra virgin olive oil — which almost no store carried when I started working in the newspaper business — a household staple and things like kale and quinoa started showing up in the most unlikely places.

The catch, Kimball says, “is that someone needs to come along and make wine simple in the way wine is simple for the French. You have it with every meal, like bread, and there are only two kinds, good and bad.” But he expects that to happen sooner, rather than later.

The Wine Curmudgeon is working for sooner.