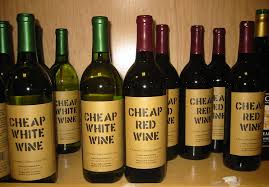 A visitor left a comment the other day in the first $3 wine challenge post: “Hey, it cost less than $3. So what did you expect?” Hence this post, because even though a cheap wine doesn’t cost much, that doesn’t mean it has to taste cheap:

? Varietal correctness. Cabernet sauvignon should taste like cabernet sauvignon, chardonnay like chardonnay, and so forth. Otherwise, what’s the point? Should we just have two gigantic Big Wine vats, one red and one white, and everything can come out of that?

? Value for money. No, a $3 wine isn’t going to taste like a $100 wine, and I don’t expect it to. I do expect it to offer value and to be the best $3 wine it can be. Otherwise, what’s the point? If we just want cheap crap to get drunk on, then we can drink Thunderbird and Night Train.

? An honest effort from the producer. The wine business’ cynicism is what keeps wine from being more popular in this country, and too much cheap wine proves that point. Producers make junk like the $3 challenge wines, or this wine club plonk, because they’ve taught Americans — like the man who left the comment — not to expect anything better. Or, even worse, the wine business knows most wine drinkers don’t know any better, think the $3 swill is OK because it costs $3, and are too confused to figure out what’s going on.

All of which is a horrible way to sell anything, and especially horrible for something that’s as much as fun as wine. Can you imagine what would happen if the car business worked that way? Which, as it happens, the car business once did, and the result was the very flammable Ford Pinto. One day, perhaps, the wine business can give us cheap wine as satisfying as today’s cheap cars (like my much beloved Honda Fit).

Until then, I’ll keep expecting more than they want to give us.

4 thoughts on “Cheap wine: What do I expect?”