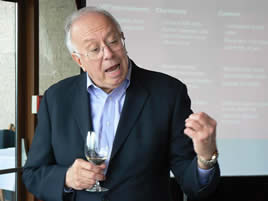 The first rule of sportswriting used to be “Don’t god up the ballplayers.” Which meant that athletes were not necessarily better or worse people because they were ballplayers; they were just different, and you needed to keep that in mind when you wrote about them.

That approach has served me well over the past three decades, because it made sense for everything I’ve written about: politics, business, film, music, food (especially food), and wine. Perspective is all, and just because someone is a fine winemaker doesn’t mean they’re a good parent or friend or colleague.

So how do I write a piece honoring perhaps the best wine PR person in history without godding him up? Carmen Castorina, who retired earlier this month after some three decades at E&J Gallo, was adored by his colleagues (three farewell lunches); admired by his competitors (“Whenever I see Carmen I smile and feel good”); and apparently returned every phone call he ever got. Would that some of the ballplayers I dealt with were half that talented.

Which is not to say that Carmen and I never had a disagreement. Writers and PR people are born to trouble as the sparks fly upward. But what made Carmen the best, and why he was so respected, was that he never let those disagreements get in the way of doing his job. No grudges or snide remarks, and certainly not any of the punishments so popular today — being excluded from events or not told about news because the writer wasn’t “part of the team.”

Carmen always had a story, whether it was the time we were having lunch in Troy Aikman’s booth at a Dallas restaurant and Aikman, the former Cowboys quarterback, showed up and had to sit elsewhere. Or working with Ernest Gallo — yes, that Ernest Gallo — to market the winery’s first varietal wins and to help to take the California wine business into the 20th century. Or, as Carmen told our mutual pal Alfonso Cevola, how he set up umbrellas on the Jersey Shore in summer when he was a kid and that “Al Martino [of “Godfather” fame] always gave me a 50-cent tip. ?

I’ve dealt with PR people since the late 1970s, and almost no one did it better. So Carmen will be missed. I’ll even miss his little digs about my failure to include Gallo’s Barefoot in the $10 Hall of Fame and his insistence that Notre Dame was as good a school as my alma mater, Northwestern. And we’ll still have lunch now and again; I just hope Aikman doesn’t want his booth. Cause he ain’t getting it.

Slider image courtesy of Afonso Cevola and on The Wine Trail in Italy, using a Creative Commons license

4 thoughts on “Carmen Castorina: When a legend retires”