If Big Beer understands the need for ingredient labels, why is it so difficult for wine to do the same? 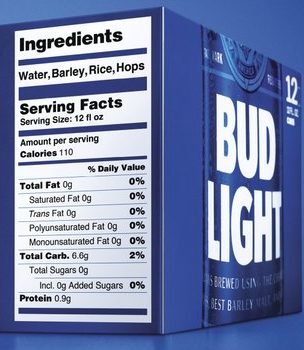 Budweiser is beefing up the ingredient labels on its Bud Light beer. Yes, that Budweiser, whose marketing gurus think the above video is witty and whose product is seen by many as the reason for craft beer.

Yet, somehow, Bud and its parent, Anheuser-Busch, are smarter and more modern and more progressive then the wine business. Wine has  viewed nutrition and ingredient labels as the spawn of the devil since the end of the 20th century, despite their value in the fight against the neo-Prohibitonists. Is it any wonder I’m not the only one worried about the future of the wine business?

Writes the Associated Press: “Bud Light went with a big, black-and-white label, similar to the ones required by the U.S. Food and Drug Administration on packaged foods. … ‘We want to be transparent and give people the thing they are used to seeing,’ said Andy Goeler, vice president of marketing for Bud Light. … [He] said the brand’s research shows younger drinkers, in particular, want to know what’s in their beer.”

Shocking news, of course, to everyone but the wine business. I’ve been writing about nutrition and ingredient labels for wine since since my newspaper days, and the message has remained the same: Why ketchup and not wine? Why not transparency? What is wine trying to hide?

Or, as consumer advocates said in this 2009 story I did for Palate Press, the refusal to add ingredient labels ”puts the industry outside of the mainstream given developments in food labeling and consumer information. The goal, they say, is more information, not less. ‘It’s all about transparency,’ says dietitian Kathleen Talmadge, RMA, RD. ‘Any time the consumer gets more information, that’s a good thing. You want them to be knowledgeable about what they’re buying.’ ”

So Bud Light, one of the most simple and inexpensive alcohol products, has better ingredient labels than a $25 California wine. How much sense does that make?