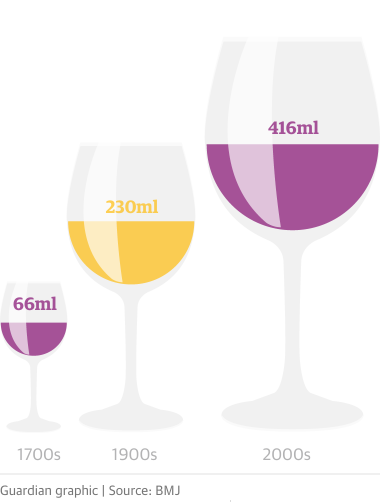 A British study says we use bigger wine glasses than ever before – but do we know why we do?

A friend of mine is convinced that wine bottles hold less than they used to, insisting that she only gets two glasses from a bottle instead of the four or five of years past. It turns out my friend is onto something, though not quite in the way she thinks. It’s not that the bottles hold less, but that we’re using bigger wine glasses. Lots and lots bigger.

That’s the surprising result from a 2017 British study that found that wine glasses were one-sixth smaller in the 1700s and have gotten bigger since then. That means a full-to-the-rim glass 300 years ago was the equivalent of half a pour today – 2 ½ ounces vs. a typical 5-ounce glass of wine (or five glasses to a 750 ml bottle).

The study was conducted by health researchers and appeared in a British medical journal, so it focused on the effects of too much drinking. In this, say the authors, the evolution of bigger wine glasses might be related to alcoholism and binge drinking (the latter a particular problem in Britain). If the glass is bigger, aren’t we going to drink more?

The authors are careful not to go much further, emphasizing that “greater affordability, availability, and marketing of alcohol products, and more liberal licensing. …” has led to increased drinking in the last 75 years. We’d also have to know alcoholism rates starting in the 1700s, plus wine consumption (gin, in fact, was the British drink of choice in the late 17th and early 18th centuries). And then we would still need to figure out a way to correlate that data to begin to understand if there is a relationship between excess drinking and bigger wine glasses.

I doubt that link exists, given the often astonishing levels of drinking in the pre-industrial West. What’s more interesting is why glass sizes increased, something else the study doesn’t do much with. One reason was technology – the development of lead crystal n the late 17th century made it possible to produce less fragile and larger glasses, while the discovery of the Pyrex process in the late 19th century made even bigger glasses common.

In addition, what’s the relationship between improved wine quality and larger glasses? Bigger glasses allow us to better appreciate the wine’s flavors and aromas. Who knew that was necessary – or even possible – given the poor quality of most wine until the beginning of the 20th century?

Finally, how could the authors overlook the role of capitalism, which not coincidentally took root in 18th century Britain? Perhaps the reason for bigger wine glasses is as simple as marketing. The rise of capitalism and industrialization meant there were more and more rich people who wanted to show off their new wealth, and what better way to do that than with fancy wines served in fancy glasses? Isn’t that one of the joys of capitalism? That someone will always be around to sell us things we don’t really need, and that especially applies to wine glasses.

Graphic courtesy of The Guardian, using a Creative Commons license