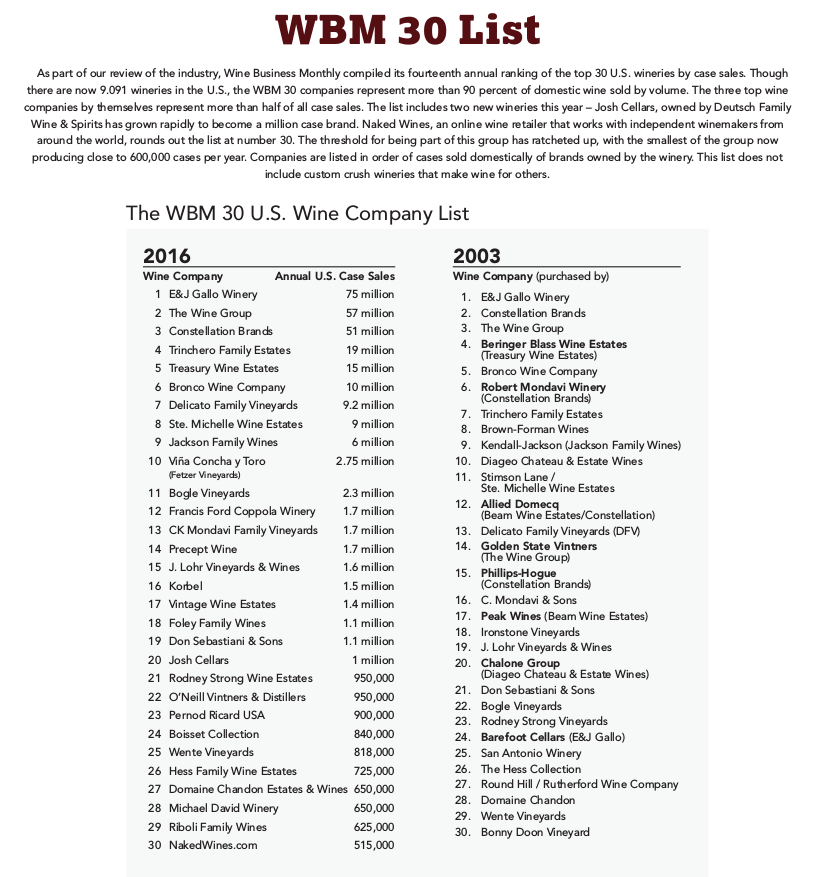 How dominant has Big Wine’s position become in the United States? Consider that:

• The top 30 wineries on the 2017 Wine Business Monthly rankings represent more than 90 percent of domestic wine sold by volume. Which means that the other 9,000 U.S. wineries account for less than 10 percent. That’s the the chart on the left; click it to make it bigger.

• The top three brands – E&J Gallo, The Wine Group, and Constellation Brands – account for more than half of the domestic wine sold. That’s consistent with what has been happening over the past several years.

• The only independent among the 20 best selling U.S. wine brands in 2016, according to Nielsen’s survey of wine retailers, was Bogle. The only other sort of independent was Yellow Tail. Everything else came from one of the handful of Big Wine companies that dominate the business. (This is proprietary data, given to me by my source in Big Wine. Since I’m not supposed to have it, I can’t link to it.)

• From the same Nielsen numbers: One of every six “bottles” of wine sold in the U.S. in 2016 was either Barefoot, from Gallo, or Franzia, from The Wine Group.

These numbers are staggering enough, but they’re not necessarily new. The 90 percent figure was Big Wine’s percentage in the first couple of Wine Business Monthly surveys in 2003 and 2004. What matters is that the number of U.S. wineries has more than doubled in that time, and Big Wine’s share hasn’t gotten any smaller. How is that possible?

First, the growth in wine sales in grocery stores and chain retailers like Total Wine, which look to Big Wine to fill all that shelf space. Second, consolidation among producers. More than half of the wineries in the original Wine Business Monthly list are either part of another company or they sold most of their wine assets to someone else.

Is all of this good or bad for wine drinkers? My friends on the West Coast, who can get almost any wine they want because they live in California, say it doesn’t matter. That’s because they aren’t strangled by the three-tier system the way those of us in the rest of the country are. For us, big chains and supermarkets are a fact of life, and we’re stuck with what they sell us. In Dallas, the ninth biggest city in the country, there’s only one quality independent retailer left.

A friend of mine, a sophisticated wine drinker, buys his wine at the grocery store. It’s just easier, he says, and that makes up for what he knows is a selection that defines mediocrity.

The other thing to ponder: How does Big Wine mesh with premiumization, in which consumers are buying more expensive wine? The two seem contradictory. Can premiumization continue if Big Wine is making all the wine that we’re paying a premium for?

6 thoughts on “Big Wine takes over”