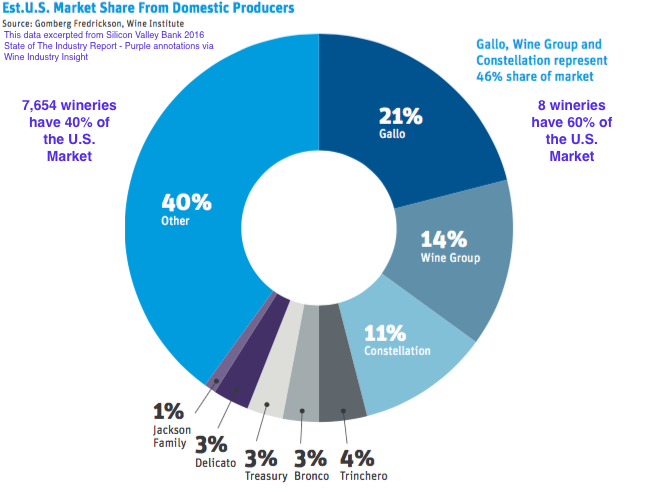 Three sets of numbers — two public, one passed to me by my source in Big Wine — show just how dominant Big Wine continues to be, and how Big Wine growth will affect everything we drink.

The first public chart, reproduced here, was compiled by Lew Perdue at Wine Industry Insight, and shows that the three biggest companies — E&J Gallo, Constellation, and The Wine Group — control almost half of the U.S. wine market. In this, the eight biggest companies sell 60 percent of the wine in this country, which leaves more than 7,500 wineries to fight over the other 40 percent.

Those are almost the same numbers in the second public study, the annual Wine Business Monthly top 30 producers list, which are similar to the finding in the magazine’s 2014 report, when Gallo, Constellation, and The Wine Group controlled half the U.S. market. Meanwhile, the top 30 companies in the 2016 report accounted for 74 percent of all the wine sold in the U.S. Interestingly, that’s less than they reported in 2014, when the top 30 sold 90 percent of the wine; chalk that up to bigger companies, like Diageo, selling their brands to smaller companies.

The three biggest companies (again, Gallo, Constellation, and The Wine Group) controlled about half the U.S. market in the landmark 2011 Big Wine study conducted by Phil Howard at Michigan State.

It’s important to understand how big big is. First, the Wine Business Monthly top 30 total just .04 percent of all U.S. wineries, which makes the infamous One Percent look like an all-inclusive kumbaya sing-along. Second, Jackson Family, which makes Kendall Jackson and is about as close to a national brand as wine has, isn’t one of the half-dozen biggest producers in the U.S. It’s eighth in the Wine Industry Insight chart and ninth in Wine Business Monthly’s rankings with almost six million cases. That’s still big, but the biggest companies are so gigantic that even some of their brands, like Gallo’s Barefoot, sell more than all of the Jackson Family portfolio.

In other words, every time we buy wine, the odds are better than not that we’re buying a Big Wine product even if we don’t want to. My colleagues in the Winestream Media pooh pooh this whenever I write it, arguing that wine drinkers have more choice than that. What about those other 7,500 wineries? The catch, and what they don’t understand, is that most of us don’t shop in places that sell wine from the other 7,500. We shop at Costco and Walmart and grocery stores, and those retailers account for almost half the wine sold in the U.S.

Case in point: Sales statistics for 2015 that my source in Big Wine passed to me for 10 U.S. states (none of which are California), and where Big Wine (defined as a company that appears in either the Howard study or the Wine Business Monthly top 30) dominates at all prices:

? 9 of the 15 best-selling wines between $15 and $20 are from Big Wine, including La Crema (Jackson Family), Louis Martini (Gallo), and Meomi (Constellation).

? 12 of the 20 best-selling wines between $12 and $15 are from Big Wine, including Wild Horse (Constellation), Kendall Jackson (Jackson Family), and Chateau Ste. Michelle (Altria). And I didn’t include Hess and Rodney Strong, both on the Wine Business Monthly Top 30 list but family run.

? All of the 20 best-selling wines between $9 and $12 are from Big Wine, including Menage a Trois (Trinchero), Cupcake (The Wine Group), and Apothic (Gallo).