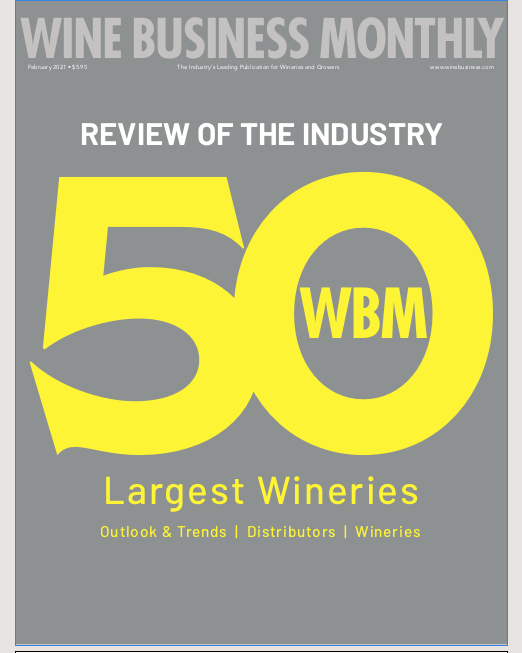 A funny thing happened to Big Wine during the pandemic. It probably didn’t get that much bigger.

That’s one of the most interesting parts in Wine Business Monthly’s 17th annual wine industry survey, which tracks the ups and downs of the U.S. wine business and ranks the 50 biggest producers in this country. In the 2020 report, the top 50 produces of accounted for 90 percent of domestic wine sales, as they have done for years. But the 2021 number is about the same – despite early indications that that the percentage could be higher.

And it could be. Cyril Penn, the magazine’s editor, says the pandemic made it more difficult to gather data, both from producers and from trade groups that track wine sales.

But Big Wine remains dominant, even though there are some 11,000 wineries in the U.S.:

• E&J Gallo is still the behemoth of world wine production, accounting for 88 million cases last year. That’s more than the second and third biggest companies combined. In other words, at least one out of every four bottles of wine sold in the U.S. is a Gallo product (such as Barefoot, Apothic, and Louis Martini), and it could be as many as one out of three.

• The top three producers – Gallo, The Wine Group (Franzia boxes, Cupcake), and Constellation Brands (Mondavi) – totaled 158 million cases, about half of U.S. production. The top 10 accounted for about three-quarters, which is more or less the same as 2020.

• The biggest growth, save for Gallo, likely came in the middle tiers — 15 to 30 or so. A variety of producers in that range have been snapping up smaller companies over the past several years, furthering consolidation in the 1 million case range.

• National brands excelled, since consumers focused on supermarket labels during the panddemic. Josh Cellars’ sales increased 43 percent and Barefoot was up 18 percent. The latter is especially telling, since Barefoot growth has slowed in recent years. And, allowing for the statistical caveat mentioned above, Barefoot could account for as much as five percent of the sales of domestic wine — all by itself.