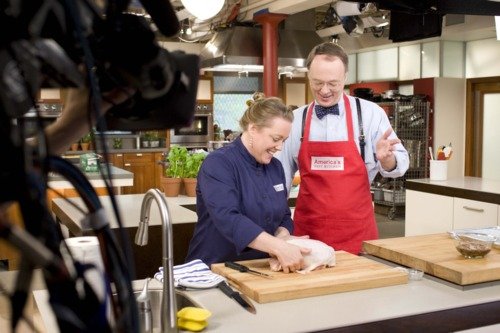 Chris, do you need a bottle of cheap wine with that chicken?

America’s Test Kitchen, the PBS cooking show, has always pursued the best possible recipe with enthusiasm and skill. This, in a world of food TV that revolves around celebrity chefs who haven’t chopped an onion since culinary school, makes the program worth watching for anyone who enjoys cooking. Plus, bow ties are cool.

The catch, though, like so many other food programs, is that it never really understood wine, figuring more expensive was better because it was more expensive. This always seemed odd for a program that delighted in finding that the cheapest cocoa powder produced the best brownies.

Happily, this is no longer the case. In the new ?The America’s Test Kitchen TV Show Cookbook, ? the program embraces cheap wine with such gusto that the Wine Curmudgeon had to write this post. Consider:

? Slow-Cooker Beef Burgundy: ?Don’t spend a lot of money for the wine in this recipe ? in our testing, we found that California pinot noir wine in the $6-$20 price range worked just fine. ? Mark West pinot noir, anyone?


? Coq qu Vin: ?Use any $10 bottle of fruity, medium-bodied red wine, such as pinot noir, Cotes du Rhone, or zinfandel. ? How about the Little James Basket Press?


? Sangria: ?After trying a variety of red wines, we found that inexpensive wine works best. (Experts told us that the sugar and fruit called for in sangria throw off the balance of any wine used, so why spend a lot on something …?) ? Rene Barbier Mediterranean Red, perhaps?


Call this another victory in America’s slow, steady march toward common sense in wine. And the producers figured this out, apparently, without any help from the cheap wine book. Imagine how much better the recipes would be if they had read it ? think I should send Christopher Kimball a copy?