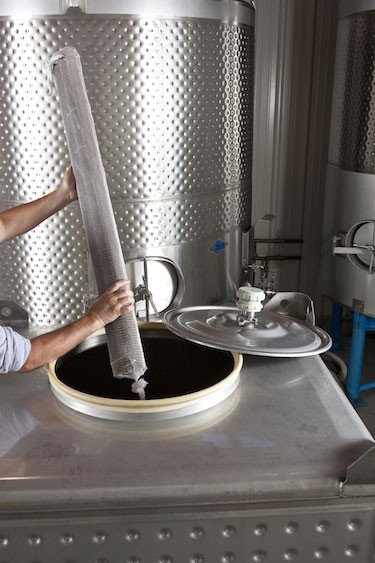 Just slip these oak spirals in the wine tank, and you’re on your way to barrel aging.

What is fake oak? Why do winemakers use it instead of oak barrels? How can I spot it?

Fake oak is not an official wine term, but it best describes what has become a common way to add oak aging to wines that cost less than $20 to $25. Instead of using oak barrels, winemakers substitute oak chips, oak staves, oak inserts, oak spirals, oak cubes, oak dominoes, oak chains, and oak bags.

The reason for these barrel substitutes? They cost a tiny fraction of an oak barrel, as little as 10 percent of a $1,000 – or more – new barrel. Plus, they’re much more efficient at imparting oak flavors and tannins than barrels, which reduces aging time and cuts costs even more.

The most important thing to remember about fake oak is that it’s neither good nor bad. It’s how it’s used by the winemaker that matters. Some try to mimic barrel aging to reproduce the subtlety and character it brings, while others use it to add specific flavors that can be touted on the back label – the chocolate and cinnamon and cherry cobbler that aren’t common with traditional barrel aging.

In this, fake oak comes in an almost countless number of flavors and barrel varieties, replicating oak combinations from around the world and every flavor associated with wine – and then some. One charred toast option adds “super dark color, smoke, vanilla, and caramel flavors.”

How can wine drinkers tell if wine has real oak or fake oak? I asked Steve Menke, the Colorado state enologist and an associate professor at Colorado State University, to help us spot fake oak. Menke, who has made wine throughout the U.S. and Canada, prefers the term alternative oak, and emphasizes that fake oak is not necessarily a bad thing.

“If oak alternatives are used properly – not too much and not too easily extractable, most consumers do not notice the difference between them and barrel aging,” he told me. “That said, many winemakers are using these alternatives without much skill or caution, as the practice is still young.”

These tips should help you spot wines with fake oak:

• Price. Given the economics of winemaking, there’s no way producers can afford barrel aging for most of the wine made in the U.S. That means, says Menke, a $15 or $20 cabernet sauvignon will almost certainly use fake oak, and a similar cabernet with barrel aging will have to cost $25 or more. In this, Big Wine is no different than many smaller producers; they just may be less subtle about it.

• Region. My experience has been, save for some parts of Spain, France, and Italy that mandate barrel aging, fake oak is used everywhere in the world. And most of the wine where barrel aging is required, save for Rioja in Spain, costs $25 or more.

• Over the top flavors. Fake oak adds its flavors more quickly, since the wine surrounds the oak product. That’s much different than with a barrel, where the wine touches only the inside of the barrel. That difference in the surface area that is exposed to the wine means faster extraction of flavors, so that winemakers who leave the fake oak in too long get cherry cobbler instead of bing cherry.

• Ask. Retailers should have a good idea about how the wine they carry is made. Also, Menke recommends asking the winemaker when you’re in the tasting room what kind of oak he or she uses.

5 thoughts on “All about fake oak”