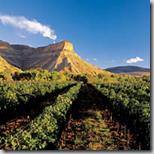 Colorado is not there yet, of course. Save for a handful of producers, the wine isn ?t on the level of New York, Missouri or Texas, let alone California or France. Their owners and winemakers — an eclectic assortment of lawyers, venture capitalists, oilmen, geologists, and even a former British army commando ? are still struggling to find the right grapes to grow and the right methods to use for Colorado ?s peculiar weather and soil.

But the state has more than 70 wineries, a number that has increased 13-fold since the early 1990s. And what they lack in consistency, they make up for in enthusiasm and determination. ?Yes, we have a long way to go, ? says Drew, who was a trucking and shipping executive before opening his winery in 1998, buying 155 acres on a hay farm. ?But we ?re going to get there. ?

Don ?t worry if you ?ve never thought of wine and Colorado. Until the mid-1990s, almost no one else had either. The state had just six wineries until 1993, and very little history of winemaking. And why should it have had either? At first glance, Colorado is too cold in the winter, too warm in the summer, too dry year round, and way too high in the mountains to grow grapes. Grand Junction, for example, in the Grand Valley viticultural area, has 21 wineries despite its 4500-foot elevation (and some of the wineries are even higher than that). Compare this to Napa Valley in California, where the land is mostly less than half as high.

Yet today, Colorado’s wineries are in areas as diverse as Cortez; Grand Junction and Delta and Montrose counties to the southeast; the Front Range in and around Boulder and Denver; and even a couple in the Rockies in what is otherwise ski country. What makes a difference in Colorado is something called a microclimate — a climate within a climate.

How microclimates work involves entirely too much physics to discuss comfortably (it ?s the same process by which icebergs float), but what it means is that some locations in a Colorado valley ? like Drew ?s — can support wine-quality grapes, while a spot a mile away is either too cold or too hot.

On a normal spring day, the temperature can be 80 degrees at Drew ?s property and 90 degrees farther west along Highway G. It also helps that even when temperatures reach 100 degrees in the summer, they cool off as much as 50 degrees at night, something grapes like (though the industry is still working its way around the shorter growing season and early frosts typical of high altitudes)..

Hence wineries located amidst scenery that is as distinctive as anything in Burgundy or Bordeaux. Canyon Wind Cellars, east of Grand Junction near Palisade, sits on a rise along the Colorado River, with the Book Cliffs perched to the north and sandstone bluffs all around. And if you ask owner Norm Christianson, a geologist, he can even explain how the bluffs came to be, moved hundreds of miles by Ice Age glaciers.

In Cortez, Drew ?s vineyards sit amidst 800-year-old Anasazi ruins, which yield pottery shards and arrowheads to anyone lucky enough to get a tour of the area. This is not surprising, since the area around Cortez includes Mesa Verde National Park, world famous for the ruins and excavations of these ancient pueblo-dwelling people who thrived for about 1300 years until the 14th century. In fact, down the road from Drew ?s winery is an important site called Duckfoot, excavated by archeologists at the Crow Canyon Archaeological Center in Cortez.