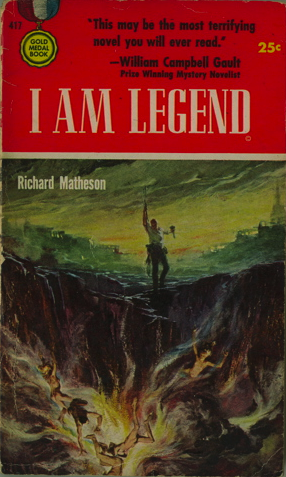 The afternoon was cloudy, and Robert Neville didn’t know how long he had until dark. Because he had a lot of work to do — he had made 47 stakes.

It hadn’t always been like this. Before the war and the plague and the dust storms, when Virginia and Kathy were alive and people lived on Cimarron Street, life was normal. Or it had seemed that way, driving to work with Ben Cortman, having dinner with Virginia and a nice $10 bottle of wine, and enjoying the weekend barbecues with the other families on Cimarron Street.

Cortman, who lived a couple of house down, always knew where to get the best wine deals. He could find a terrific Sicilian red or a Spanish white or even a French rose for as little as $8, and when Neville asked him how he did it, Cortman would smile and make his usual bad joke: “If I told you, I’d have to kill you.”

Which, of course, is what Cortman was trying to do now. Neville, his 47 stakes driven into 47 lifeless but not dead bodies, was barricaded in the house on Cimarron Street, waiting for daybreak. He had barred the windows, even boarded them up, had reinforced and bolted the doors, and surrounded all with so much garlic that the stench was a permanent part of his life.

Still, the noise from the hundreds of people — if you could call them that — was deafening, and it seemed to get louder every night. Neville knew he must soundproof a room soon; otherwise, the howling was going to make him even crazier than he was afraid he already was.

“Come out, Neville!” Cortman was screaming like he did every night. “We’re ready for you, Neville. We have our Napa cabs and our Super Tuscans, and they all got 98 points. Don’t you want some?”

Neville didn’t remember exactly when the plague started. But he remembered the results — people who had thought Bogle was a splurge bringing cult 15 percent pinot noirs to the barbecues, Cortman subscribing to every wine magazine he could find and talking about cigar box aromas and dusty tannins, and Virginia — God, his sweet, gentle Virginia — telling him to pry open his wallet to buy some wine that actually had flavors she could taste.

Neville, though, seemed immune from the plague. He had been stationed in France during the war, and maybe it was the vin ordinaire he had drunk. All he knew was that as the world went high alcohol and over-extracted around him, all he wanted was a little terroir.

So he made stakes, lots and lots of stakes.

They still came every night, Cortman and their wailing about $2,000 first growths, but Neville had accepted it. It was them and the end of wine as he loved it, or his daylight bloodletting. There didn’t seem to be a choice.

And then one morning, after he had cleaned out a particularly nasty den, with dozens of empty bottles of 97-pointers and wine magazine back issues open to the tasting notes, he saw her.

She was sitting at a table in the park in daylight, drinking what looked like a Gascon white blend, and reading the book with the green bottle and the brown hat on the cover. And it was daylight. Neville blinked, couldn’t believe what he saw, and then ran screaming toward her. Could it be? Could there be someone else?

Her name was Ruth, and she said all the right things. She had been to Italy, had acquired her immunity there, had been running and hiding since the plague started. The same thing had happened to her husband and two sons that had happened to Virginia and Kathy.

When the end came, Neville wasn’t surprised. “I never really believed you,” he told Ruth.

Ruth and her colleagues, most of whom wrote about wine on the Internet, had captured him that morning. They had mutated, had adapted to the plague the way human beings have always adapted. They could live in the light, but they weren’t like Neville.


“It’s better this way,” she said. “Your time is past. We’re going to remake the wine world, so that there is room for everyone, whether you want to spend $10 or $20 or even $50. Even if I don’t like high alcohol, isn’t it OK if someone else does?”

Neville smiled. He could see the others, standing behind Ruth, crowding to get a glimpse of him. And then, before they led him to his death, as he watched them, he realized why they feared — and maybe even admired — him: “I am legend.”

A tip o’ the Curmudgeon’s fedora to the late Richard Matheson. He was a brilliant horror writer who is too little known to mainstream audiences, no doubt because “I am Legend” was turned into three crappy movies, and whose work included the William Shatner Twilight Zone, “Nightmare at 20,000 Feet.” “I am Legend” is not only a first-rate horror story, but its paranoid, noir style speaks to the Cold War era when it was written.