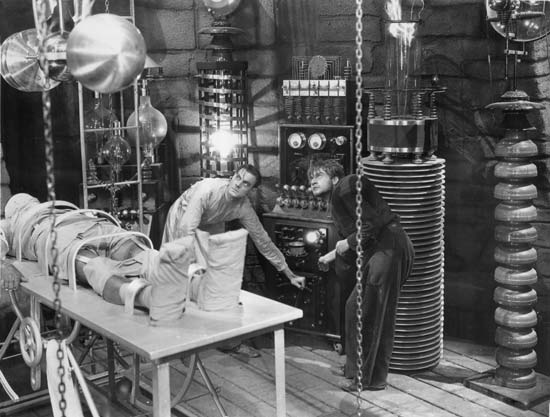 Lightning flamed across the night sky, and the Baron saw the dark clouds piling through his laboratory skylight. A storm was coming. The electricity cut out for a couple of seconds, came back. The Baron took a deep breath. ?It’s now or never, ? he said, and he laughed, loudly, fanatically, and was more sure than ever that what he was doing was right, doing the one thing that would make the world a better place for the wine he knew people should drink ? darker, heavier, fruitier, more alcoholic.

?Igor, prepare the equipment. We are about to create the perfect wine writer. ? And he laughed the laugh of the damned.

The Baron had not always cared about wine. He had always enjoyed it, of course, whether cult cabernets from Napa Valley, hard to find Super Tuscans from Italy, or inky, 99-point Australian shirazes. He was an important man, a researcher and a scientist, the son of the one of the most powerful families in the land. He bought wine worthy of his status, to remind people who he was and what he could afford. And he never, ever drank anything that scored less than 95 points.

But the world was changing. People were drinking wine he didn’t like, and he didn’t understand why. How could they enjoy unoaked chardonnays? Or light red blends? Or even, God forbid, rose? And the critics he loved, the men who had defended the 95-point bastion, were not what they once were. One had even retired, and the Baron was shocked at the news. How could his heroes be so frail? How could they be so human?

That’s when wine became something more for the Baron. It became his obsession; his colleagues, whispering behind his back, called it his curse. His fiancee, worried, came to visit the Baron at his ancestral home deep in the mountains, but he barely had time for her. All he did, she wrote her father in long, tear-stained letters, was cut out reviews from Wine Spectator buying guides and clip articles from back issues of the Wine Advocate. And when he wasn’t doing that, she wrote, he was locked in the laboratory with Igor, and she would hear hisses and hums throughout the night.

The night before she left at the end of October, and knowing the man she loved had crossed the line from sanity to somewhere unthinkable, she heard him tell Igor: ?The brain is ready. We’ve loaded it with all the information, all the scores, all the descriptors. We are ready to create life! ?

Igor flicked a series of switches, and the laboratory came alive, rotors whirring and condensers humming.


?Now, Igor, now, ? and his assistant turned two knobs in succession. The Baron, shaking, knew it was time, and he pushed the button. The machinery burst with light, and the Baron could almost see the power surge through the cluster of wires attached to what looked like a man lying on the table.

The body twitched once, twice. The head rose, fell back. One arm moved, and then the other. Next, the left leg, followed by the right. The Baron was laughing, crying, screaming, when he heard a voice from the body on the table — slowly and shakily at first, but soon steady enough: ?The cedar, tar, and black currant are passionately entwined, and the wine is intense, with a smoky, exotic nose and sweet jammy fruit ? 97 points. ?

The Baron lifted his head to the heavens: ?It’s alive! Oh, in the name of God, It’s alive. Now I know what it feels like to be the publisher of the Wine Spectator. ?

The first report came from the village market, where a blocky, man-like creature had knocked over a display of sauvignon blanc: ?This is not serious wine, ? shouted the Monster. ?Where is the oak

Then the owner of the local wine shop watched in horror as the Monster ripped a dozen books in two ? the one with the brown hat and green bottle on the cover ? and destroyed the section with the Oregon pinot noir. ?Only 12 1/2 percent, ? cried the Monster. ?Where is the alcohol

The townspeople caught up with the Monster near the cliff outside the Baron’s castle; there had been broken bottles of $10 Sicilian whites scattered in his wake for blocks. ?Stop him, ? cried one, ?block his path, ? said another, and the crowed formed between the Monster and the castle, cutting off his escape.

The Baron had worked his way to the Monster’s side. ?Stop it, ? he said, and grabbed the Monster’s hands in his. ?This is life. This is creation. This is the perfect wine writer. Never again will a cava get a 94. ?

But the Monster wasn’t listening. ?Do you want to advertise in our Wines of Bordeaux issue he asked the Baron. The Baron, confused, shook his head no, and the Monster picked up him like an empty wine box and tossed him over the side. ?The best way to ensure a timely review is to advertise, ? he told the crowd, but they would have none of it. First one rock came at his head, and then another, and then more and then bottles and branches, too, and the Monster lurched and sidestepped awkwardly until he was at the edge of the cliff and then he was over it, spiraling downward.

?It’s time to go home, ? said the wine shop owner as the Monster fell out of sight. ?There are no monsters now, only the wine we want to drink. ?

A tip o’ the Curmudgeon’s fedora to Universal Studios and director James Whale for giving me something terrific to steal again this year after last year’s Hammer Film’s Dracula effort. The photos are courtesy of FrankensteinFilms.com, using a Creative Commons license.